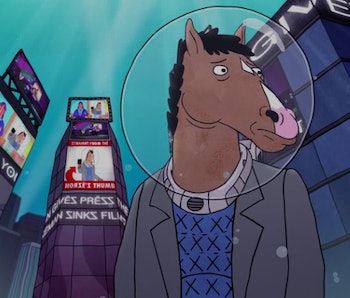 Sofia Coppola’s 2003 film Lost in Translation, one could argue, is a science-fiction film. It has all the trappings: a traveler who ventures into a strange land with inhabitants and a culture he doesn’t understand. Stranded and alone, Bill Murray’s character builds a little world for himself on a foreign planet. BoJack Horseman’s fourth episode in the third season, “Fish Out of Water”, works in much the same way, only the show’s absurd world and emotional realism affords the show an even more unique world in which to play.

In “Fish Out of Water,” BoJack is sent underseas to an ocean metropolis to promote his Secretariat film. The underwater country is populated by the show’s water dwelling creatures, which have been mostly absent in the above-ground world of the show. The location helps firm up the sometimes-shaky rules the show has regarding its anthropomorphic animal society. By showing off a new country underwater, it helps give structure and rules to the show’s animal kingdom.

The episode lays on the allusions to Translation pretty thick. The first half of the episode, in which BoJack wanders about the city to an atmospheric, synth-laden soundtrack is a straight-up homage to the movie. BoJack also borrows plenty of the film’s narrative choices, such as the use of language and culture to further isolate the protagonist as he continues with his constant existential crisis. There is even a shot in the later half of this episode that mirrors the first minutes of Lost in Translation.

Both Lost in Translation and “Fish Out of Water” suggest that any society other than our own might as well be an alien civilization. BoJack has the added luxury of being able to use ocean creatures in this metaphor, as they have always been likened to alien species. The world building in this episode alone happens so quickly, and so naturally. The moment Bojack steps off the submarine, he’s faced with new technology (his breathing helmet), new written language (something that looks Cyrillic but is easily legible to English speakers), and creatures that are strange, even by the show’s standards. The barrier between BoJack and this new location is immense to the point of being insurmountable.

As soon as BoJack arrives underwater, the tone of the episode shifts into a silent film, as BoJack’s helmet prevents him from being heard the undersea inhabitants, and his non understanding of their undersea language. But the sense of awe and wonder is pitch perfect. The animation has never looked more gorgeous than in this episode, and while the show has always maintained a unique look, even by the standards of western animation, this episode in particular felt like it was really pushing the envelope. It’s almost anime-esque in that the show puts away its Chuck Jones antics for a moment to revel in the atmosphere of its own animated universe.

Whereas the sci-fi tropes were merely borrowed in Lost in Translation, BoJack Horseman turns the episode into a literal entry into the genre. As BoJack, already an odd horseman, travels this high-rise, high-tech city with an astronaut helmet, he’s venturing into a world that has always been imagined as outer space on Earth. The ocean and its infinite mysteries is a miniaturized version of our wildest space fantasies. Tentacled creatures, big grey heads and oblong eyes, and only through advanced technology and pressurized vehicles can the ocean be traversed.

If Lost In Translation was “Fish Out of Water”‘s only inspiration I would have still loved it, but the total time allotted to referencing the film is still only about half the episode. It features a long bus ride in which BoJack helps a male seahorse give birth to baby seahorses; BoJack stranded on a deserted ocean highway which echoes the road movies of Wim Wenders; and a trip to a saltwater taffy factory that references both Willy Wonka and Charlie Chaplin. This episode is a petri dish of experimentation.

The show ends, as per usual, with BoJack’s attempt at self-actualization failing, and the world continues to reveal itself as an uncaring machine of chance. But I can’t stop myself from going back to the sci-fi elements of the show. It’s not so much that this episode purposefully pursued this futuristic direction. Like the rest of the series, the world building surrounds the borders of the show’s central themes of existentialism and mental health. But towards the end when BoJack’s alcoholism and nicotine withdrawal are helped by specifically underwater means of waterproof nicotine patches and a vodka suppository, I can’t help but focus on the sci-fi elements of this episode as its defining feature. Because space really is a complimentary setting for the psyche.

In “Fish Out of Water” BoJack lives out a sci-fi adventure. I don’t think it’s a coincidence that this episode, which focuses on undersea life, and Lost in Translation, which takes place in Japan, have latched onto alien imagery. But for the first time in the show’s three seasons, the creators were able to craft a strange and trippy landscape with a basis in the stranger parts of our real world. It’s important to note that BoJack is sober for most of this episode, whereas previous episodes which featured insane visuals often required BoJack to be on a drug-fueled bender. Here, melancholy and atmosphere take the place of manic depression.