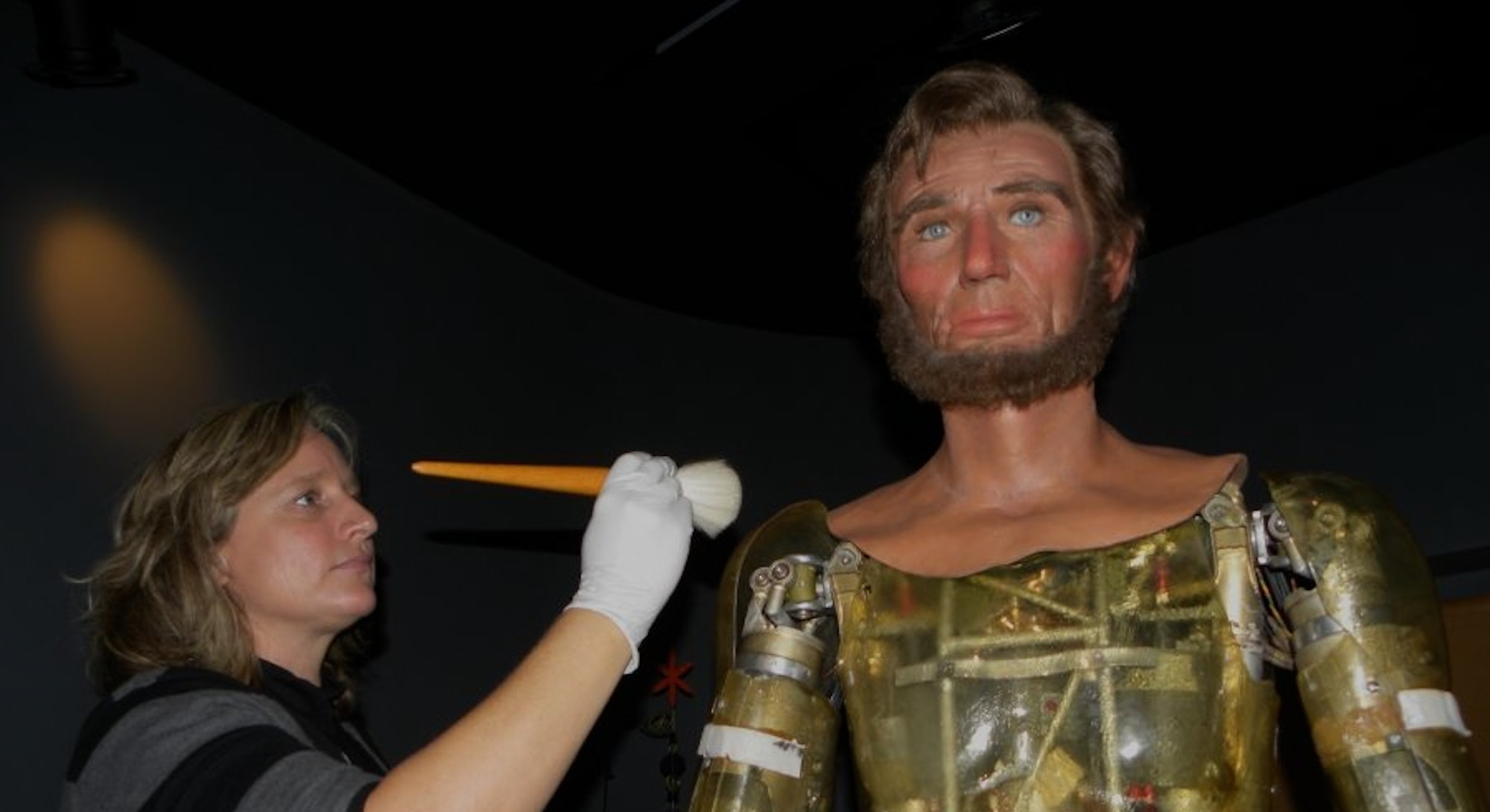 Animatronics have a rich and storied history, much of it dating back to the 1964 World’s Fair. Walt Disney was fascinated by animatronics and Disney Imagineers designed and built several of them for attractions at the fair, including “its a small world,” The Carousel Theater of Progress, and the world’s fully animatronic human figure for “Great Moments with Mr. Lincoln.”

Never before had there been such realistic, seemingly independent humanoid figures; through timed movements in their lips, arms, legs, and heads, all synchronized along with a soundtrack to create a stunning illusion of life. And when the fair ended, Disney transferred the animatronics to different pavilions in Disneyland. Mr. Lincoln found a home in Disney’s Hall of Presidents, and both “it’s a small world” and “The Carousel of Progress” became their own attractions.

The public display captured the imagination, and set off a massive and far-reaching period of excitement and advancement in animatronics. As components and computers have gotten better, faster, and smaller, animatronics have improved by leaps and bounds. They became instrumental parts of practical effects in film and television, as well as used in military training and the medical field. The applications for animatronics are many and changing thanks, in large part and in more ways than one, to emerging technology.

Whether that advancement can keep up with the rest of the tech world, however, will determine whether animatronics continue as vital tools or fade into nostalgia.

Animatronics first big leap, after the Disney introduction, came in the ‘70s and ‘80s, when more advanced computers were integrated into the machines.

“That definitely changed animatronics in the sense that all of the audio and movements and everything could be done using programs on PCs, which allowed figures to move and move more realistically,” says Garner L. Holt, founder of Garner Holt Productions — a company that’s created animatronic figures for Disney Parks, NASA, Universal Studios, FAO Schwarz and the Museum of Science and Industry.

It’s not just computers, though. Nearly every aspect of animatronics has seen some degree of advancement, from stronger servos to more nuanced software; and from faster, smaller, more powerful electric motors to chemical breakthroughs in materials like platinum-based silicons.

But, while technological advancement has undoubtedly made the product better, it also presents an existential threat to the health of the animatronics industry. Technologies like 3D video, CGI and VR have impacted the demand, the expectations and the prevalence of animatronics, perhaps most noticeably in theme parks and in special effects work for film and television.

“Technology’s both helped me and hurt me,” says Rick Lazzarini of The Character Shop, a company that has done animatronics work for practical effects in features films like Aliens, Groundhog Day, and Ghostbusters, as well as commercials. “More people are turning to CGI for effects and that started cutting into what we do, quite awhile back.”

Lazzarini was inspired to work in animatronics by a childhood love of monster movies and onscreen creatures. Several decades ago, the best (and sometimes only) way to create an impressive creature or non-human character onscreen was with animatronics and practical effects.

Now, though, CGI has stepped in and supplanted a lot of the work that was once achieved through those practical effects. Lazzarini is pretty straightforward about the fact that the industry has taken a big hit over the last 10 years. Shrinking budgets and compressed timelines mean that while animatronics engineers were once given a lot of time and freedom to experiment and innovate, clients are looking for off-the-shelf solutions instead of new creations with increasing frequency.

Innovation does still happen, though, and practical effects still have their advantages. While CGI has opened new doors with regards to the way action sequences unfold and how characters and environments behave onscreen, there’s something to be said for elements and characters that exist in the world of the film alongside the sets and actors.

“The advantage to [animatronics] is that they’re immediate, they’re present,” says Lazzarini. “They’re right in the shot.”

That means that the light that shines on the actors, props and environment is the same light that illuminates the animatronic figures, which goes a long way towards grounding the element in the space. They’re also performable, meaning that directors can get the exact performance they’re looking for out of an animatronic puppet or figure on-set.

This can be an advantage and a disadvantage. Though CGI elements can bend, float, fly and jump at will without regards to any of Newton’s Laws of Motion, there’s also a degree of realism that comes with being grounded by the physical limitations we all know, understand and recognize. While animatronic figures like the dinosaurs in Jurassic Park may be unfamiliar, when they exist in a physical space, there’s an inherent realness to them (and they set the template for the CGI beasts in Jurassic World).

Ultimately, the fact is that films like Aliens, which were done using all practical effects, still hold up today. With miniatures, clever camera work, and massive animatronic figures like the Alien Queen — which was 17 feet tall, had two operators inside of it, and had a mix of cable control and hydraulics that sometimes took up to 11 people to operate — Aliens is proof that practical effects can produce great results.

In theory, the new and the old would work best in tandem.

Even if they’re being replaced on screen, animatronics are still useful on set. Lazzarini created two Slimer and Mrs. Slimer animatronic figures for the new Ghostbusters film. They were eventually replaced by CGI, because the figures were designed for lighting and movement reference and as something for the actors to act to, but that work is proof that animatronics still has a number of roles to play in the world of visual effects, even if those roles are shifting and changing.

Animatronics have been huge hits at theme parks ever since Walt Disney brought his Mr. Lincoln and singing children back with him to Anaheim. Rides like “Pirates of the Caribbean” and “The Haunted Mansion” are perennial favorites at the Disney Parks, and in general, Holt says that the most successful theme park rides are typically rides with animatronic components.

“Animatronics is a way to make a fully immersive environment — make an attraction, bring all the characters to life, allow you to step into a living movie and walk around and interact with characters.”

But, like in the world of practical effects for film, theme park animatronics are feeling some degree of pressure from emerging technologies like 3D and immersive video. Because it’s much simpler to create images on screens than it is to build physical elements that are a part of the world, some attractions have attempted to bring characters to life with video rather than animatronics.

Holt points out that you don’t have to go to a theme park to see 3D characters on a screen; all it takes is a trip to the movies, or to watch your rich friend’s 3D TV. In general, he says that audiences respond better to rides with animatronic components as well as film-based effects.

“Through a lot of surveys that theme parks have done,” says Holt, “guests have told them that people appreciate the more immersed environments, the more complete environments like the old-style “Pirates of the Caribbean”, “The Haunted Mansion”, the Cars ride, things that can use some film-based effects, but at the same time are not trying to eliminate animatronics.”

A key part of the appeal on theme park rides is their ability to add a new level of immersion, even if they repeat the same movements and dialogue every 30 seconds.

It’s pretty hard to tell a story without the characters, right? So when you’re talking about characters like pirates, cars, ghouls, ghosts, talking cars and the like, there’s something to be said for the physicality. It contributes to what J.P. Telotte calls “inhabitable text” — this idea that theme parks are about bringing a fictional world to life and making a part of our very real world.

While video provides a lot of opportunities, there’s a very real barrier between the world of the film and our own world of which we can’t help but be conscious. Animatronic figures, though, are performers, and they achieve this very physical, very corporeal goal of inhabitable text in a dynamic way.

The big question mark, of course, is VR. It’s designed to be immersive enough to drink your brain into inhabiting a totally different world — the one that you see with your eyes instead of the one that exists outside of a headset. Certainly there’s something to be said for that degree of immersion when the goal is bringing a world to life. But theme parks aren’t quite there yet. We’re not yet strapping on headsets and diving into immersive, video-based worlds as we ride through physical environments. Engineers and designers aren’t even really sure what that would look like yet.

It’s still unclear how rides are going to continue to develop in theme parks, but Holt says that there may be some success when it comes to blending emerging technology with animatronics.

“There’s a lot of potential for technology, if used wisely, to add to the story, to enhance the story — the total overall enjoyment of the immersive experience for the guest,” he suggests.

“Animatronics needs to continue to improve, says Holt. “Audiences are very sophisticated nowadays and they expect to see things that look right and look real and are staged well and lit well and operate well.”

As immersive video and VR make their way into theme parks with increasing frequency, we’re likely to see the balance between physical, of-the-world elements and visual effect-based elements changing and shifting. Creating experiences is still an arena of rapid innovation, and it’s one that’s far from static.

For now, animatronics still seem to have their place within the inhabitable text of theme parks and within the films that have the budgets and the desire to use practical effects when possible. It’s up to those still making them to keep the technology competitive in a world in which, for better or worse, new is most always seen as better.