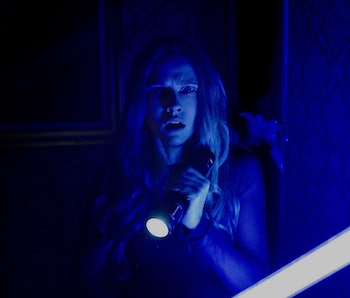 This year’s most terrifying movie preview — even, perhaps, over The Conjuring 2 — is probably that of Lights Out, a new film by Hollywood first-time director David Sandberg, and produced by The Conjuring’s own James Wan. It opens this weekend in theaters everywhere.

Wan’s attachment to the project, and the preview’s arresting opening, gives the film the air of being something outside of the normal blockbuster horror fare (see The Forest or The Boy for recent, willfully average examples). In the Lights Out trailer’s cold open, a woman glimpses a bony, contorted, female figure lurking in the dark corners of a textile factory whenever she turns off the lights. As she flips them on and off, the figure advances towards her. It’s a pretty indelible image.

After seeing the opening minute of the preview, you’ve essentially seen a retread of the beginning of the much-reposted two-and-a-half minute short film, directed by Sandberg. The film resulted in a deal for a full-length adaptation, after racked up a cumulative 12 million-ish YouTube view count and some horror festival accolades. The film’s trajectory recalls producer Wan’s own ascendancy — Saw was originally an eight-minute short film — as well as the backstory for films like the Guillermo del Toro-produced Mama.

Sandberg’s movie is perhaps the most iconic horror short of the decade so far, but also likely the briefest; its one-trick creepiness feels appropriate for the Creepypasta era. Yet one wonders how much mileage Sandberg can get out of this aesthetically grabbing visual gimmick, which seems to find its precedence in shadowy Japanese horror standards like Ju-on: The Grudge and Pulse.

Lights Out — the full-length film — spends time exploring the relationship between lead Rebecca (Teresa Palmer, who also, incidentally, appears in the American Grudge 2) and her mentally unstable mother (Maria Bello). Rebecca suspects that her little brother (Annabelle’s Gabriel Bateman) is being pursued by a spirit. After all, it’s always the cute little boys, isn’t it? This leads Rebecca to determine that there is a specter in her mother’s past, and that the spirit of this creepy, late young woman, Diana, is hanging onto the mortal plane, feeding off of people’s fear of, you know, the dark. Why? She came to a tragic end of some sort; the trailer indicates a shaky view of what looks like an electric chair — there’s an ominous-looking retro nurse fiddling with switches.

In other words, this is textbook stuff for the genre. Though Palmer has claimed in interviews that she was attracted to the familial dynamic, and has dubbed this a “smart” horror film, it’s hard to find any indications that Lights Out is finding a way to break pre-established horror molds, though it may deliver intelligently choreographed jump scares that most horror fans relish. Reviewers have generally supported these suspicions — it’s nothing revolutionary — though deemed the film generally enjoyable and professionally done. Variety claims that Lights Out “never strays too far from its source, essentially repeating the same jump scare, over and over again, for most of its… running time.”

Then again, perhaps it’s wise for a first-time director to not try to attempt too much with their first full-length work. Horror nuts and completists should still go and get their Friday night kicks this weekend, but without expecting Wan-level brilliance.