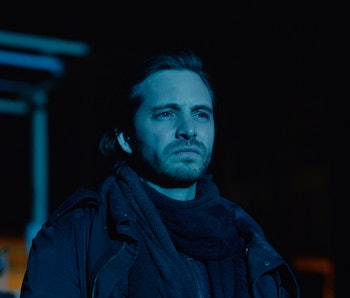 And so the second season of Syfy’s time-traveling drama, 12 Monkeys, has ended and we finally have confirmation of the identity of the Witness, the series’ looming big bad. Of course, in being answered, that simple question has given way to dozens more complex head scratchers. Chief among them: What the fuck just happened?

Followed closely behind that impossibly large question are a rapid series of thinkers, like Is Deacon (Todd Stashwick) going to stay dead?, Why did it take them so long to get Jones (Barbara Sukowa) whooping wholesale ass? How in the hell is Jennifer (Emily Hampshire) going to get out of 1917?, and What super power is Ramse’s (Kirk Acevedo) kid going to have?

Those are all bits that will be revealed in season three (hopefully). However, the season two finale reveled in a mystery that has plagued the show since the pilot: what makes James Cole (Aaron Stanford) so damn special?

After experiencing a fun series of combination time-freezes and hallucinations, Cole visits a maybe Primary named Lillian (Madeline Stowe, nailing the creep vibe) who’s been sitting in an insane asylum waiting for him to show up. It’s here, James Cole is woken up to the fact that the delightful little paradise he’s been building with Cassie in 1959 is complete crap. Time is still coming to get them.

Of course, there’s a little boon to the visit. Cole learns that he can travel through his own past without the benefit of a time machine. Even before this revelation, Cole was aware that something was wonky with his surroundings. Cassie, on the other hand, had no clue there was anything wrong. In other words, the season finale made it clear that James Cole has a special relationship with time, one that goes beyond his fellow time travelers, but that differs from the oddly manic Primaries scattered throughout the time stream.

In perhaps any other show on television, you might have to simply accept that Cole is special because that makes it easier for the writers to move the story forward. However, it’s here where 12 Monkeys has done a great job laying the groundwork for this new revelation. You’d be forgiven for not remembering, since it happened all the way back in the penultimate episode of season one, but there’s a very big difference between Cole and his counterparts.

Cole has survived a paradox.

Not only that, but Cole was the epicenter of a paradox, something no other character on the show can boast. Scrambling from time period to time period in season one and searching for some way to cure the life-threatening illness brought on by time travel, Cole injects himself with a sample of blood taken from his younger self.

How Will it Play In Moving Forward?

So now Cole can travel back through his own past correcting mistakes. It would seem this ability is the forerunner to the Witness’ ability to travel freely through the time-space continuum.

From there, it gets a little muddy. Can Cole call up his ability at will? If so, that’ll make it pretty easy to correct any past mistakes (like inseminating Cassie). The most pressing question, however, is whether or not this new ability can really change anything at all. It was rough run for the good guys on 12 Monkeys this season, and so far all their effort has gotten them exactly where the Witness wants them.