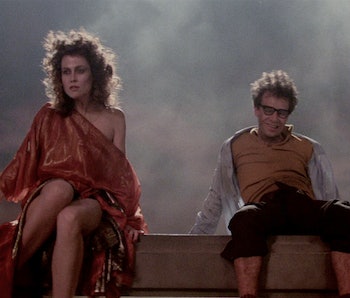 Director Paul Feig’s Ghostbusters hit theaters over the weekend, and while it couldn’t bust enough ghosts to dethrone Illumination Entertainment’s The Secret Life of Pets, it still managed to capture $46 million domestically. It’s a respectable sum for a movie plagued with a whole lot of ridiculous controversy. If you look past all the misogynist bullshit, Feig’s movie is an absolute blast. It’s not perfect, but it’s a reprieve from tired summer blockbusters and is generally guaranteed not to ruin your childhood. It is, above all, a welcome addition to the Ghostbusters lore for an entirely new generation of fans affectionately called “ghostheads,” and hopefully, a franchise-starter. That said, all signs pointing to the storyline for the sequel should be snatched up by a ghost trap.

A $46-million opening weekend might not seem like a ton, but it was seemingly a good enough start for Sony. “The Ghostbusters world is alive and well,” Sony distribution chief Rory Bruer told The Wrap. “I expect Ghostbusters to become an important brand and franchise. While nothing has been officially announced yet, there’s no doubt in my mind it will happen.”

Considering the fact he’s one of the people whose job it is to make sequel decisions, and the fact that star Melissa McCarthy told The Hollywood Reporter she would “do 102 more of these,” sequel seems to be a foregone conclusion. And they’ve already set it up with a post credits sequence.

Beware of spoilers if you havent seen Ghostbusters yet, but if you stay after the credits there’s a scene featuring all four Ghostbusters in their new Tribeca firehouse headquarters, which was too expensive for them to rent earlier in the movie. Each ‘buster tinkers with new contraptions and tech, including Jones’s Patty Tolan, who listens to audio recordings of electronic voice phenomena. What begins as boring lab works soon makes her seriously concerned. She takes off the headphones and asks her fellow Ghostbusters: “Hey guys, what’s Zuul?”

Cut to black, and right into the reboot sequel that will technically be a remake of the original.

Zuul should be a familiar name to Ghostbusters fans. In the original 1984 movie, Zuul was the gatekeeper of Gozer the Gozerian, the original’s main villain. It, along with another Gozer minion named Vinz Clortho, keymaster of Gozer, took the form of two demon terror dogs and possessed Sigourney Weaver and Rick Moranis’s characters. That allowed for the arrival of the evil Sumerian god Gozer who, along with the Stay-Puft Marshmallow Man, wanted to destroy New York City and take over the world (side note: explaining the plot of Ghostbusters makes it sound terrible, so big ups to the original for making it work).

The point is that this Zuul reference after the credits isn’t just mere fan service, of which there was a lot in Feig’s reboot. Producer and the original’s director, Ivan Reitman, has put together a production company called Ghost Corps to oversee the potential Ghostbusters multiverse. The Zuul nod is nothing if not a calculated franchise move, and an unwise one at that.

There was so much anti-reboot fervor surrounding the 2016 installment for merely existing that it prompted the normally mild-mannered Feig to say in a semi-related interview that “Geek culture is home to some of the biggest assholes Ive ever met in my life.” Ostensibly remaking the original with the new cast would be playing with even hotter fire. We’re not saying Feig and his cast couldnt handle it, or that if they don’t do it the Internet trolls win, but it’s just inviting more unwanted and unwarranted misogynist fury.

Beyond that, for all the things the reboot did right, it still re-visted (albeit in clever ways) many of the story beats of the original — an angry dean kicking characters out of Columbia, the Aldridge mansion ghost being like the original’s library ghost, the introduction of the Ecto-1, the No-Ghost logo, and reboot villain Rowan’s gigantic specter was the that movie’s gigantic Godzilla-esque Mr. Stay-Puft proxy, just to name a few.

Cherry-picking specific storybeats from the 1984 movie makes the reboot sequel choosing the original’s Zuul story kind of mind boggling. The hope was that the series could have ventured into less redundant and more unique territory, but this reboot sequel will be a reboot of the original storyline that the reboot copied in the first place, except now it’ll have to shoe-horn in whatever details it left out, like the characters Dan Barrett and Louis Tully.

If you thought the reboot looked a lot like the original, well get ready for more. Unless the filmmakers rehash Gozer, Zuul, Vinz Clortho, and Mr. Stay-Puft (again) in a completely new way — which they should, because it’s entirely plausible that those characters don’t have to adhere to the same plot — then prepare for the updated Ghostbusters sequel to go back to 1984.