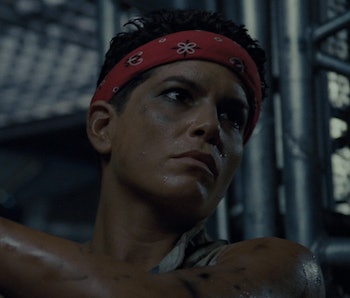 Aliens, the action-comedy sequel to James Cameron’s seminal sci-fi horror film Alien, was released in theaters on this day, 30 years ago. Aliens altered and updated quite a few aspects of the franchise: Cameron doubled down on the maternal body horror, revealing a giant xenomorph queen, and expanded the films’ analysis of artificial intelligence by placing yet another android on the playing field.

He also created a butch Latinx hero in Private Vasquez, and that character remains one of the only masculine-female “good guys” in cinematic history. One of her most memorable exchanges in the film is as follows:

Private Hudson: Hey Vasquez, have you ever been mistaken for a man?

Private Vasquez: No. Have you?

Oh ho ho, gender jokes! It’s a huge drag, however, to remember that Vasquez was played by a white woman wearing brown contacts and literal brown-face make-up. Despite casting a non-Latinx actor in the role of a character coded in the script as Latinx, Aliens created a hero who existed outside of the gender binary. As Goldestein told LA Weekly, “A lot of gay women come up and say, ‘Oh my God, when I saw you, and you had a masculine look to you, I saw myself, but I had straight women coming up to me with the same thing. Someone was going through breast cancer, and she told me that with each round of chemo she would think of Vasquez. A gay man from Guatemala came up to me, and he said, ‘I identify so much with her, but he was very feminine. Vasquez is universal.”

Positive fan reactions to Vasquez’s presence onscreen illustrate how complicated gender representation is, especially in historically inflexible genres, like action or science fiction. Too often, the conversation about representation in popular, contemporary fiction is limited to “I finally get to watch a character who looks or thinks or acts like me,” when the reality of the diversification of media is more complex, and actually more intelligent. Any character operating outside the norm of tropes and stereotypes, like both Vasquez and Ripley perform in Alien and Aliens confirms for millions of viewers that social outliers not only exist, but that their agency in a storyline is engaging, worth a viewer’s time, and not defined by any particular character trait.

It’s satisfying that a film which joyously played with action tropes — “game over, man!” — found pleasure in giving Vasquez a straight-forward heroic send-off, rather than making her masculinity a source of ridicule or discomfort. She is called out for not being feminine, but that accusation is made by the film’s bumbling douchebag character, played to perfection by Bill Paxton. Paxton’s character draws attention to the elephant in the room — that Vasquez is even less feminine than Ellen Ripley — and is humorously interrogated regarding his own gender, which disarms the whole exchange and tells the film’s viewer to take it easy.

Thirty years later, we’re still arguing about the gender performance of actors in blockbuster movies, ignoring that Aliens already dipped a toe in that particular pond.