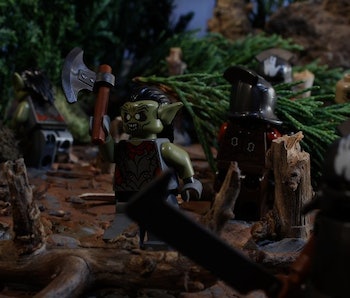 Stop motion is a complicated craft. Assembled together frame-by-frame, it’s a time-consuming process, and one that requires physical, real-world elements that move and articulate. It’s not for the faint of heart, and it requires an incredible amount of patience and attention to detail.

Stop motion requires pieces and characters that can be moved, posed and can hold those positions. While major stop motion productions use puppets and pieces designed specifically for a single film, some animators take a little different approach and use tools that lend themselves to stop motion animation pretty naturally: LEGO.

One such stop motion LEGO animator is Kevin Ulrich, who works full-time as a freelance stop motion animator and puts some of his creations on his YouTube channel, BrotherhoodWorkshop. Ulrich has created stop motion LEGO videos that tell personal stories as well as videos that explore beloved worlds and characters, like those in Harry Potter, Lord of the Rings and Star Wars.

Growing up in a military family and moving frequently, Ulrich spent a lot of time writing and shooting stop motion and claymation videos as a kid.

“It was actually LEGO that got me into stop-motion to begin with,” says Ulrich. “In 2001 they released the ‘Steven Spielberg MovieMaker’ set, that came with a stop-motion computer program and camera, along with a movie set, backdrop, and tons of stop-motion materials,” he told Inverse. “I animated using LEGO toys for 3 years, but as a teenager I decided I was too old for toys, and moved on to making claymation videos”

The reason for going back to LEGO? Time.

“I animated using clay up through my college graduation, says Ulrich. “It wasn’t until I was working a full time job that I decided to go full circle and use LEGO toys once again. This was primarily due to the fact that LEGO toys are much easier to animate and construct settings for than clay characters, allowing me to make decent progress on a video in a single evening.”

In 2015, after working with the LEGO Group on freelance projects and building his client base, Ulrich made freelancing his full-time job. Now, Ulrich runs his YouTube channel and creates sponsored and commissioned projects for clients like The LEGO Group, Warner Brothers, DreamworksTV, and Crunchyroll.

Much of Ulrich’s work involves using LEGO for his stop motion projects, and the reason for using LEGO is pretty simple: Because LEGO elements are easy to build with and to move and pose, and because they’re made to stick in their environments, they really speed up the process.

“If I were to attempt the same projects with clay or other types of puppets, it would take me weeks to construct the sets, whereas with LEGO it only takes hours,” says Ulrich. “Although the process is still time consuming and tedious, it is not nearly as tedious as it could be. And I like that I can bring an idea from concept to fruition in a week or less, so I seldom get tired of any given video before it is finished.”

So…what does the process of creating a stop motion project with LEGO look like? Well, it’s more or like any other movie.

“If there are multiple settings, I try to finish up each location all in one go before moving on to the next setting,” says Ulrich. “Often I have to take down each build as soon as it is finished to repurpose its parts for the next setting. Often I will animate all day, and then do the compositing and add the needed visual effects in the evening, just to make sure all the visuals are working. Once the animation and visual effects are finished, I will cut in the sound effects, voices, and music.”

And how long does that take? As one might imagine, it varies.

“In a 12 hour day, I can usually animate 15 seconds, so long as the shots aren’t too complex,” he says. “When working for a client, I usually like to schedule two weeks for every minute of animation, just to make sure I have the time necessary to respond to any notes or changes that they require.”

Ulrich doesn’t always do everything by himself, though. While he handles the vast majority of the work on each video, from set design to sound editing, sometimes he enlists a few others to help.

“My colleague Rick Cortez helps with graphic design and any computer effects that I have not yet mastered,” says Ulrich. “My wife Celina sometimes helps with the writing and the mouth animation when necessary. My brother Brian often designs my more elaborate exterior setting. And my composer friend Trevor Gomes does most of my custom music.”

Its true that stop motion animation is much faster when the bulk of your toolset is made up of toys that seem all but purpose-built for the task. But even with LEGO, stop motion is a complex process.

“The only real difficulties of working with LEGO are the difficulties inherent in stop-motion animation,” says Ulrich, “moving every character 24 times per second, keeping track of sometimes 30 characters in the same shot, getting the camera close enough to get good shots on such tiny objects, sometimes dealing with very hot studio lights that can be somewhat stifling.”