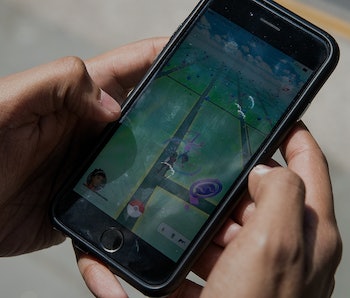 Pokemon Go has finally arrived in the UK for iOS and Android. The augmented reality creature catching game has taken the U.S., Australia, and New Zealand by storm, but until now British gamers had to live vicariously through American players’ excited postings on Reddit and elsewhere. No more.

Brits were so excited prior to the launch that an imitation app had skyrocketed to the top of the iOS App Store. Go Catch Em All barely lasted the day at the number one spot, presumably because Apple removed it once it realized how misleading the description was. The app used a very similar description and screenshot to the official Pokemon game, but upon launch it became clear that it was all a lie.

Wednesday’s German launch had prompted speculation that a wider European launch was around the corner, but developer Niantic had yet to confirm anything, making Thursday’s release a welcome surprise.

Unfortunately, not everybody can start playing straight away.

Some people didn’t think the UK should get the game at this stage, with fears that the already-overworked servers won’t be able to cope with the excited scrambling masses.

Of course, there were ways to get the game early. Those with access to an American, Australian, or New Zealand iTunes account could download the game ahead of launch. Chinese users have been buying accounts like these on the Taobao store, some going for nearly $4 each. One store claims to have sold over 5,000 accounts.

Jim Waterson, political editor for Buzzfeed UK, appears to have been one of the lucky few with early access, using it to record prime minister David Cameron’s resignation on Wednesday.