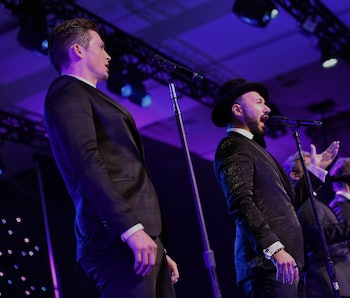 The Tenors are under fire from critics and fans alike after an unplanned musical statement during Tuesday night’s MLB All-Star Game in San Diego, CA. The Canadian group was set to open the game with their national anthem, but one member decided to change the lyrics for political reasons and the crowd did not respond in his favor.

Remigio Pereira held up a sign while soloing his rearrangement of Canada’s national anthem. He is perhaps the best known within the group because of his outspoken defense of the Earth’s flatness and dedication to the Cliffnotes version of the Bible. During the line “with glowing hearts we see thee rise, The True North strong and free,” Pereira sang, “We’re all brothers and sisters, all lives matter to the great”. He didn’t even attempt to make his rewrite work within the song’s rhyming scheme.

The reaction from fans both online and in the stadium was swift. A roar of Canadian “boos” and protests followed the altered line, as Pereira held up a paper that said “All Lives Matter”. This phrase is seen as a reactionary motto — adopted by white people as a response to utterances of “Black Lives Matter” — and has been a controversial talking point and consistent mantra for conservatives on the internet.

Many who oppose the saying do so because supporting Black Lives Matter does not mean that all lives don’t; instead, the movement aims to bring a focus to the alarmingly high rate that people of color, specifically Black people, are killed by police officers and civilians in racist attacks. Most people see, “All Lives Matter” as a way to detract from the issues at hand, and the phrase is widely opposed by some of the leading tech CEOs today, including Mark Zuckerberg.

In reaction to Pereira’s actions, the band released a public statement decrying his actions as that of a ‘lone wolf’:

Until further notice, Pereira will not be performing with the band. No other details have been released.

More like this
Gaming
6.30.2022 6:30 PM
Genshin Impact fans urge developers to add more melanin to the game
By Jess Reyes
Culture
7.1.2022 9:00 PM
Male celibacy has evolutionary benefits — but not for the reasons you think
By Ruth Mace, Alberto Micheletti and The Conversation
Culture
6.28.2022 9:00 AM
8 sensational sci-fi shows and movies coming to HBO Max in July 2022
By Robin Bea
Share: