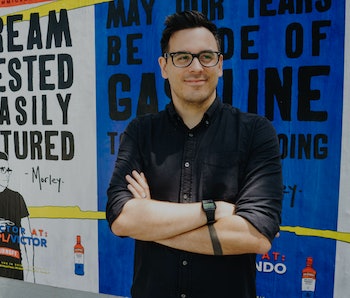 Street artist Morley is not like a lot of other street artists: There’s no lampooning of commercial culture. No popular characters turned into ironic caricatures for the purpose of judgment. There’s only a version of himself, spray-painted on a wall, and a message about paying attention. Pay attention to the struggles of the people around you, pay attention to your own struggles. Recently he’s partnered with Smirnoff to help Los Angeles deal with the struggle of its neighbors, the nearly 15 million Latinos living in this city.

Morley spoke with Inverse about how he came to work with Smirnoff for a series of bus stop art murals for immigrant heritage month.

How did Smirnoff approach you for this project?

Well, they reached out to me and they said basically we’re interested in creating an interactive art piece that focuses on inclusivity and the subject of immigration and I said, “Okay, cool.” Then, I thought about it for a while. The posters I do are very message-based and they feature me in them because the idea is to try to create a relationship between myself and the person who’s reading it, as opposed to seeing a logo or a brand or something like that — they’re seeing a person.

So the idea is to create a human relationship and that was precisely what I think Smirnoff was interested in. So I said, “What if I create these posters with messages that are inspired by real people and if they follow a [website] link they can follow that person’s story?” So that they’re essentially hearing a story while they’re looking at the art piece and creating a relationship between the person who inspired it, the artist, and themselves.

The goal was to create a very diverse sense of the stories. They all wanted to be unified in the sense that they were about positivity, inclusivity, and the concept of immigration, but they wanted to create something that was diverse and showed the different layers and the different people who make up that subject matter, and so we came up with a list of stories that we wanted to try and find.

So, basically, I made it my job to go out and find specific stories. It was a really cool experience because they all sort of hit me and, through one method or another, found these people. In the case of the DJ, I just started looking up and researching DJs in Los Angeles and found one and reached out and said, “This is what I’m working on. Would you be interested in taking part?” He was enthusiastic, so we set up an interview and it was really cool.

And these are going up on bus stops across L.A.?

Correct. There’s a bigger mural piece but also, yes, it is also going into bus stops and shelters across Los Angeles — in, I think, 20 different locations. Which is exciting to me because the thing about bus shelters is there’s constantly people passing it, sitting there looking at it, and the person who has 20 minutes to kill can see the poster, listen to the message and say, “Maybe I’ll check out the link and hear this story.” That was interesting to me opposed to other methods of reaching the people.

Have you ever done anything on this scale before?

I’ve done murals and things like that. But, being spread out across the city, this is definitely the biggest thing I’ve ever done at this level. Obviously, it’s been great because Smirnoff is printing these and usually I’m printing them myself, so it was exciting to have someone that can empower me this way, to make the project go to the next level.

So what happened when Smirnoff approached you?

What was exciting about it is that I’ve said “no” to more corporate-related things than I’ve said “yes” to because there’s an integrity to the art that I want to maintain. But, I got the sincere belief when they reached out that this wasn’t just about selling products, it was really about a positive message. They’ve been really encouraging and, in terms of not censoring what I wanted to say, not changing, and not altering it.

What would you want passersby to get out of seeing your signs?

I want everybody who walks by to think, “That poster is specifically speaking to me. That poster is just for me.” But, I want a million people to think that. You want something to feel specific to the one person but, at the same time, you want everybody to feel that relationship. So, that’s always my goal with my art: to create a relationship with the person that walks by, but also to create something that works on a broader level.

This article has been edited for clarity and brevity.

More like this
Science
Jan. 22, 2023
The oldest paintings ever found on Earth were not made by humans — research
By Paul Pettitt and The Conversation
Innovation
Jan. 19, 2023
A robot choreographer reveals why M3GAN — and all robots — should dance
By Molly Glick
Entertainment
11 hours ago
Where and how to watch the 2023 Oscar nominees
By Mónica Marie Zorrilla
LEARN SOMETHING NEW EVERY DAY.
Related Tags
Share: