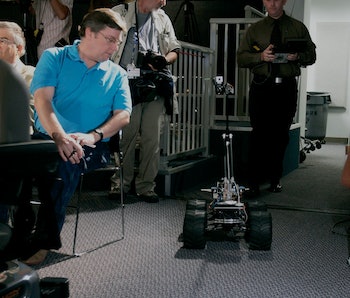 Law enforcement officers in Cleveland for the upcoming Republican National Convention will have access to at least three robots similar to the one Dallas police recently used to kill Micah Xavier Johnson after he murdered five cops. According to public records, Ohio Highway State Patrol officers have been provided three devices listed as “robot, explosive ordnance disposal” through a federal program that sends decommissioned military gear to police departments around the country. Robert Sellers, public affairs commander for the Ohio State Highway Patrol, confirmed the number.

Sellers explained that highway troopers will be part of the multi-agency force tasked with policing the Republican National Convention, which will take place from July 18 to 21 in Cleveland, Ohio. “At the RNC troopers will be used to supplement and support the Cleveland Police department to maintain a safe environment,” Sellers explained to Inverse over email, referring questions about RNC security to the Secret Service.

As a federal agency, the Secret Service may also have access to bomb robots.

The robot used in Dallas was a Remotec, Model F-5 modified with a one-pound explosive charge. Its deployment is believed to represent the first instance of domestic law enforcement using an unmanned ground vehicle to blow up a suspect. This has raised questions about whether the decision to send in the bot set a dangerous precedent.

According to Dan Gettinger, head of Bard College’s Center for the Study of the Drone, the Ohio State Highway patrol has three Marcbot-IV robots, manufactured by Exponent Inc. The Marcbot, which a government spreadsheet indicates costs $10,000, is a popular EOD robot used by soldiers in Iraq and Afghanistan. It’s relatively small, at only 32 pounds, and can run for six hours. Many initial observers assumed the Dallas police had used a Marcbot that had been modified to carry a small but deadly explosive charge.

Gettinger told Inverse in a phone interview that although most of the various small explosive ordnance disposal robots that have been used for their stated purpose – bomb disposal – they can also be modified to fit the cop’s need in the moment. “They can also fit other mission profiles, like reconnaissance,” Gettinger said. For instance, a SWAT team might send in a robot prior to entering a room where they expect to sustain incoming fire.

The Center for the Study of the Drone has found that 40 robots have been transferred to Ohio law enforcement agencies. The only state to get more robots under 1033 is California, which has received 272.

The program that disperses this military gear to law enforcement, known as 1033, came under intense scrutiny two years ago following the police killing of Michael Brown, in Ferguson, Missouri, and the massive protests that followed. Images of a police force that looked more like an occupying army than local law enforcement shocked the country, and President Obama issued an executive order intended to rein in the program. Videos from Baton Rouge, where Black Lives Matter activists continue to protest the killing of Alton Sterling, show that despite talk of “demilitarizing” the police, departments often still look like paramilitary units when confronting unarmed protesters.

At least 5,000 officers will be present during the RNC, which is listed as a national security event. Congress allocated $50 million for the event, including purchasing 2,000 new riot control suits and 26-inch bats for officers. That means that for all of Obama’s lofty talk about making cops look less like soldiers, it’s almost certain we’ll see more photographs like the already iconic one out of Baton Rouge.

Still, the public shouldn’t be too worried about bomb robots, according to Gettinger. “The EOD robots are not designed to be weapons,” he said, adding that there is still considerable cause for concern about the proliferation of SWAT teams and the military-style weapons they used. Once those tactics and technologies become a normal part of police practice, it is very difficult to rein them in, Gettinger explained. He went on to say that its critical civilians remain alert to the other types of military technology “migrating into the civilian landscape.”

More like this
Innovation
5.13.2022 11:00 AM
These robots have one special skill that could make human chefs obsolete
By Sascha Brodsky
Innovation
5.18.2022 6:37 PM
One simple thing makes the Nissan Z a perfect sports car
By Jordan Golson
Innovation
5.18.2022 5:30 PM
Boeing Starliner OFT-2 launch date, specs, and timeline for the ISS flight
By Harry Stoltz
Share: