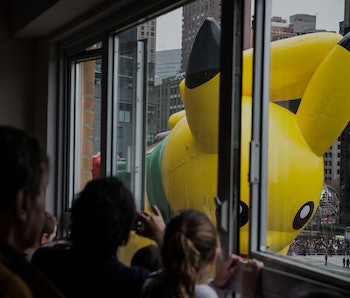 It’s easy to get sucked into the world of Pokémon Go, but please take care of yourself, and start looking where you’re going. A slew of people have posted their injuries incurred while playing Pokmon Go from staring at their phones instead of looking at the ground in front of them.

For those unfamiliar, Pokémon Go is an augmented reality game that encourages users to explore the physical world around them in order to catch virtual Pokémon. Churches, offices, and even the White House serve as PokeStops for users to collect items and the streets just outside your home are teaming with Pokémon waiting to be caught.

But despite Inverse’s guide to playing the game, users are still tripping over themselves, scabbing knees, and nearly getting in car accidents in order to “catch ‘em all.”

Mike Schultz, a 21-year-old communications graduate on Long Island, New York was skating and scanning for nearby Pokémon when he took a tumble off his board. He told the Associated Press he wasn’t going fast enough because he wanted time to scan the area, thus causing him to scrape up his hands when he hit a bump along his path.

“I just wanted to be able to stop quickly if there were any Pokémon nearby to catch,” he says. “I don’t think the company is really at fault.”

Kyrie Tompkins, a 22-year-old freelance web designer, doesn’t even have a skateboard to blame. While walking on the sidewalk her phone vibrated and in excitement to catch a creature she walked into a hole in the sidewalk and twisted her ankle.

Lindsay Plunkett, a 23-year-old waitress in Asheville, North Carolina, has been doing a lot of exploring and is now nursing a bruise after tripping on a cinder block used to prop open a door.

There don’t appear to be an reputable reports of actual car accidents happening due to the game but there have been a few close calls. Vinney Vaillancourt on Twitter almost lost control trying to catch a Drowzee.

Even the Washington State Department of Transportation is worried about people crashing their cars.

The game actually attempts to discourage people from driving and playing because eggs can’t be hatched while traveling over 20 mph. But that hasn’t stopped people from spawning Zubats onto their dash.

Stay safe out there, folks.

More like this
Gaming
6.12.2022 5:00 PM
How to choose between Pokémon Sun and Moon
By Jessica Famularo and Mike Bloom
Entertainment
2 hours ago
You need to watch the scariest movie of the 20th century before it leaves Netflix this week
By Eric Francisco
Entertainment
6.26.2022 12:00 PM
Obi-Wan Kenobi reveals one of the best decisions George Lucas ever made
By Alex Welch
Share: