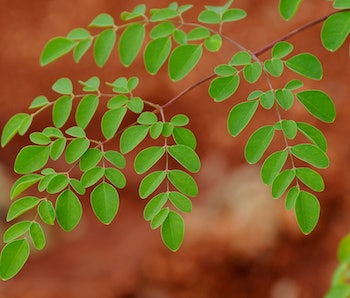 Every once in a while a vegetable will be plucked from verdant obscurity and re-branded as the superfood du jour. Suddenly, it will be at every hip brunch spot from Copenhagen to Tokyo. Right now, that vegetable is Moringa, a delicately leafy nutritional powerhouse that is getting great press and unfurling the leaves of hype. But, like so many super-vegetables of the past, Moringa is only exciting news to a smoothie-seeking few.

In yards and gardens throughout Africa and Asia, Moringa oleifera is a common sight, a tall tree with drooping branches of tiny pinnate leaves, fanning out like green feathers. To foodies like the renowned Filipino chef Claude Tayag (full disclosure: he’s my uncle), Moringa is malunggay, a plant as nutritious as it is ubiquitous.

“Moringa is trendy to the West,” he says, “but it has been deeply ingrained in traditional Filipino cuisine for centuries.”

The same can be said for the plant’s role in cuisines rooted in Indonesia, the Caribbean, and India, where humans first farmed it in the foothills of the Himalayas. Whether Moringa would ever gain a foothold in the West was never an uncertainty; the question was when.

“I’m pretty sure the West will find ways to exploit its commercial value, marketing it as a superfood for its high nutritional value,” he says. Packed with protein and vitamins A, B, and C, together with minerals like iron and calcium, Moringa has provided cheap nutrition for undernourished populations wherever it grows.

In Philippine cooking, handfuls of these tiny greens — each about the size of a fingerprint — are stripped off of their tough stems and used in soups. Tayag has seen the leaves floating on the surfaces of chicken tinola, a ginger-spiced green papaya broth, creamy mung bean soup, and corn chowder. Unlike spinach, kale, or arugula, he says, it’s too tough to be eaten raw. He’s dismissive of the taco recipe featuring parboiled Moringa leaves described in the New Yorker feature on the stuff. Of course, raw leaves are hard to swallow, he explains, “It’s supposed to be eaten cooked.”

Resourceful entrepreneurs in Moringa-rich regions didn’t need to bother waiting for the West to take note of its value. Even now, Googling “moringa” reveals a range of powders, extracts, and capsules variously described as “overall good health supplement,” “essential nutrition,” and, in some products, “natural antioxidant fat burn,” a claim that is largely unsubstantiated but touted regardless. Part of the allure of foreign, little-studied plants like Moringa is that science has not uncovered all of their secrets (or, in some cases, lack of); as such, their potential to heal all of our health woes remains limitless.

But of course it’s a lot more legitimate when you can buy it at a smoothie bar.

“It is inevitable it will be used in mass-produced ‘convenient’ processed foods the West is familiar with,” Tayag continues, acknowledging companies like San Francisco’s Kuli Kuli, which already specializes in Moringa-based snack bars, energy powders, and shots. He predicts Moringa will be folded into smoothies, granola bars, ice cream, shakes, pizza dough, bread, crackers, and chips. Even local entrepreneurs in the Philippines have found ways to repackage the vegetable to make it more marketable to their fellow citizens, who still see it as humble malunggay, the backyard staple; over the past five years, Moringa bread and wheat noodles have made their way to grocery shelves across the country, increasing the financial worth of commonplace goods — health sells! — and, presumably, its nutritional value.

Despite his belief in the vegetable’s worth, Tayag can’t help but wonder whether it can claim superfood status after it’s been processed. While kale makes for a delicious raw salad and retains much of its nutrition, even when cooked, folding Moringa into existing foods often means using it in an unnatural form. “Will it still be as ‘healthy and nutritional’ when processed?” Tayag asks. “Or will it become just another additive enriched with Moringa kind of thing?”

Whether or not it does manage to supplant kale as the West’s next great superfood, there’s no guarantee we’ll find out.

More like this
Mind and Body
7.2.2022 3:00 PM
Why does spicy food make you sweat? A neuroscientist breaks it down
By Elana Spivack
Mind and Body
6.25.2022 3:00 PM
What makes eggs organic? A USDA expert cracks open the complicated answer
By Elana Spivack
Science
23 hours ago
Protofeathers may have helped dinosaurs survive freezing weather and dominate the world
By Charles Q. Choi
Related Tags
Share: