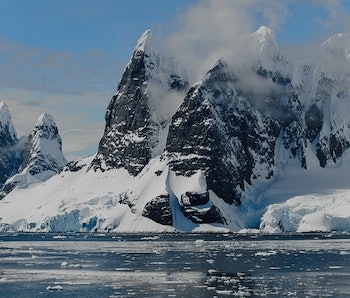 Ocean currents are about to further muddle the ongoing political and scientific conversation about climate science. The reason? Scientists are increasingly concerned that long-term global warming could be preceded by short-term global cooling depending on just what happens when glacial ice melts and starts screwing with the Atlantic Meridional Overturning Circulation. The AMOC is the conveyor belt that brings warm surface water north towards the arctic, where it becomes cold and sinks before heading south toward Antarctica. The question of what happens if it is interrupted is unresolved, but people are looking into it and finding surprising results.

According to new research published in Science in June, there have previously been big changes in the motion of the AMOC right before abrupt periods of climate change. These changes have coincided with the melting of icebergs in the Northern Atlantic. Because icebergs are full of fresh water that is less dense than salt water, melt can stop the AMOC. The fresh water keeps the layer of warm water from cooling and sinking down, acting like a plug in the current. In the past, it took roughly 1500 years for the water to dissipate and allow the AMOC to restart. While it was stuck, the planet cooled.

But researchers have been recording the strength of the AMOC since 2004, and have discovered that it fluctuates much more than previously assumed. In the last few years, the current has become significantly weaker, which researchers think led to the cooling of Northern Europe in 2010 and 2011.

Unfortunately, despite the correlation between the slowing of the AMOC and the cooling in Northern Europe, it is unclear why the current slowed down. And with only ten years of observation, researchers are unsure if the slowing is normal, if the current will bounce back to its previous strength, or what its impact will be. And historical models dont really apply here; in the past when the AMOC slowed down, the glaciers weren’t melting.

Scientists don’t understand how the AMOC works well enough to use it as a short-term predictor of temperature shifts, so no one should be stocking up for a The Day After Tomorrow scenario just yet. Still, the new research has climate scientists wondering if cooling might have greater immediate effects than the warming that would inevitably and eventually follow.