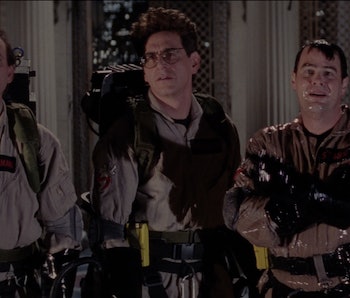 There’s no question that director Paul Feig’s Ghostbusters reboot generated a whole mess of unwanted controversy, all of which is completely the fault of sexist man-child fanboys who seem to hold the 1984 original in such high regard. They wrongfully presume it is some kind of flawless classic whose purity will be diluted simply because Bill Murray, Dan Aykroyd, Harold Ramis, and Ernie Hudson arent playing the lead characters. The original’s general reputation is still appropriate. It is the quintessential New York film, and its audacious premise is only matched by the seemingly indelible comedic talent of its stars. But it is by no means perfect, and there is absolutely nothing wrong with rebooting it for a new generation with all female leads. A large swath of fans seem predetermined to be disappointed about the 2016 reboot — which has been getting fairly decent reviews so far — because it will somehow give the Ghostbusters a bad name. But they should be used to that feeling by now. They’re forgetting — or willfully ignoring — the much-maligned 1989 sequel.

It’s safe to say Ghostbusters II isn’t as good as the original movie, which isn’t a bad thing. But its reputation as a critical punching bag should have been exhibit A in why skeptics should slow their roll about the reboot. There are moments of pure comedic bliss in the sequel, like the scene of Murray’s faux public access World of the Psychic show, Peter MacNicol’s manic performance as the bumbling eastern European minion of the film’s ancient Carpathian villain, and the way its evil slime plot gives a humorous reason for the citizens of New York City’s infamous temper. It brought the levity of the first and upped the special effects horror creepiness to boot.

It’s also worthwhile because it deals with the workingman’s hero themes of the original in a practical way. When the sequel picks up five years later, the saviors of New York City are now reduced to peddling their wares at kids birthday parties like washed up clowns. The metaphor is perfect.

It isn’t, however, without its flaws. It has vaguely the same plot as the original, the river of slime below New York City is a kind of ham-fisted story device that never makes much sense; Vigo, the main villain, is superficially memorable as a menacing painting but ineffective when he gets his one and only anthropomorphized scene in the movie’s New Year’s Eve finale; and, perhaps worst of all, the movie broadly skates by a lot just on Murray’s wisecracks alone. Murray is great, we’d love to have an entire movie of him sitting in a courtroom talking about “three million completely miserable assholes living in the Tri-State area,” but this isn’t an episode of Saturday Night Live regardless of how many SNL alums are in the cast.

One would assume most people would remember these faults. The consensus around the movie’s late-’80s release bordered on the outright vitriolic, like populist critic favorites Siskel and Ebert were less than fans. Siskel lamented that “It looks as if the filmmakers, particularly the writers, simply didn’t try to do anything special,” and that “It comes across as if the guys were filming the first draft of a script.”

Ebert was somehow even less forgiving, calling it “a total disappointment” and plainly stating “there’s no comedy in it.” He apparently attended a public screening of the movie instead of one comprised of normally stuffed-shirt movie critics, and he expected the effusive audience to guffaw throughout the whole thing. Instead, Ebert said there was “one laugh in two hours.”

What this general reaction to Ghostbusters II proved was that people could accept a less than pristine version of their beloved comedy whose renown remained unchanged. The sun would come up, the 1984 Ghostbusters would still be there the same as it ever was, and the world would go on loving the franchise regardless of whether the sequel was as good as the first one or not.

This should have been doubly obvious when the corresponding Saturday morning cartoon, called The Real Ghostbusters, began airing in between the original and the sequel. It’s most likely fondly remembered with the same nostalgic blinders that compel people to write off the 2016 reboot. They don’t realize that the cartoon wasn’t anything groundbreaking or special. They simply watched it as kids, vaguely remember liking the way it repackaged the Ghostbusters storyline for their age group, and lump it in with their skewed immaculate recollection of the original movie.

But the perspective on Feig’s reboot seems to forget all this. According to the preordained naysayers, we live in a vacuum with 1984’s original and nothing else. Questioning the sanctity of it and besmirching its good name with a new cast and the same story, and having mere opinions contrary to it, are inexcusable. It’s possible these people haven’t seen Ghostbusters II, but given their fervor it’s highly unlikely. To paraphrase Ramis’s Dr. Egon Spengler, that kind of thinking is shortsighted and pointless.

More like this
Culture
6.17.2022 11:31 AM
45 years ago, the worst Exorcist sequel almost killed the franchise forever
By Jon O'Brien
Entertainment
6.27.2022 11:30 AM
You need to watch the scariest movie of the 20th century before it leaves Netflix this week
By Eric Francisco
Entertainment
6.19.2022 11:30 AM
You need to watch the best monster thriller of the '90s before it leaves HBO Max next week
By Mónica Marie Zorrilla
Related Tags
Share: