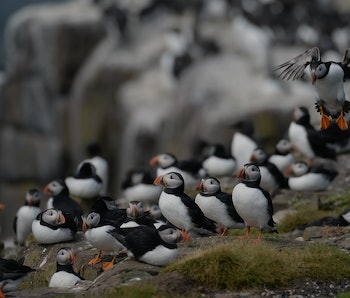 Even sworn city people hear the call of the wild. But if you’re like me and you’re stuck behind a desk for most of your workday in a bustling metropolitan area, you don’t get too many opportunities to indulge in the feral sights of the animal kingdom.

Fortunately, this is the 21st century, webcams exist, and there are truly wonderful people out in the world who have decided to point webcams at animals for all of our benefits.

And no, we’re not talking about footage like the billionth boring Snapchat your married friend from college sends you of their annoying labrador sleeping on their spouse captioned “naptime heart-eyes-emoji.” These cams are the real fuckin’ deal, and it goes way beyond the lovably wild Alaskan BearCam that went viral earlier this week. We’re talking fish, eagles, elephants, sharks, wolves, monkeys, and even goddamn puffins doing their thing on a rock in Maine. Wildlife webcams are maintained by a number of organizations, but explore.org has one of the most comprehensive lineups of furry, fishy, and just plain fantastic animal peep-shows out there. Still, there are plenty of other sites, like africam.com that also showcase some places Explore.org can’t get to.

We’ve compiled the top five places you can get your dose of the wild without leaving your desk.

Think of Nkorho Pan camera as the animal version of a South African watering hole. It attracts a variety of animals, including huge African elephants, who come down to drink and bathe. What’s really cool is that, like Africam, Nkorho Pan has night-vision capabilities, so you can watch the elephants play around in black and white at night when you’re going through an insomniac phase. Like many cams, this one requires some patience and luck, as elephants like to take their time doing things, but it’s worth it when you catch one.

We really don’t have to explain one, right? It’s chipmunks. On a log. Chipmunks are freakishly adorable, and they like logs. This camera is next to a log, and if you wait long enough, you’ll probably see chipmunks doing their thing (if you don’t see any, check out Chipmunk Mountain too.) As with the rest of the animal world, there’s always the threat of violence — ‘munks are pretty much on the bottom of the forest food chain. This camera lets you into that world of fuzzy adorableness tinged with the mortal terror of getting eaten by something every 30 seconds. So fun, right?

Walruses, as far as we can tell, don’t do a whole lot. Also, they look weird as fuck. They’re basically giant blobs of blubber that lie around on rocks in the sun all day, looking creepily like piles of human genitals. Honestly, I’m not completely sure which end is which, except when you can see the tusks poking out of their faces, but they all just sorta ooze into one another. It’s both revolting and mesmerizing at the same time — everything you’d ever want in an animal webcam.

In case Shark Week hasn’t freaked you out yet, there are options to pulling a Shallows and diving into treacherous, shark-infested waters that aren’t as dangerous. There’s, of course, some shark-watching you can do with the help of a little 360 video and a VR headset. If you’d prefer to keep the sharks on-screen, you can tune in anytime to the Cape Fear Shark Cam (which is probably the best-named cam since Chipmunk Log). It’s like a calming desktop screensaver, with charming schools of fish occasionally swimming by for minor distractions to the real gem here, the sharks. Lurk long enough, and you’ll definitely see one.

To be completely honest with you right now, I haven’t spent hours of my time watching the other cams on this list, because since I found the Sea Island Puffin Loafing Ledge, I’ve been obsessively watching puffins for hours. It’s hard to explain why. They’re not doing much, but every little move these tweety little fuckers makes is adorable and hilarious in some way. Look at them waddling around! Look at them poking at stuff with their beaks! Why is this so great?! I have absolutely no clue. Watch the puffin cam, let it become your life, loaf around with the greatest birds in the history of loafing, or birds! Sure, the camera is a little blurry with sea-spray and fog, and sure, the birds literally aren’t doing anything, but who cares? They’re puffins! Right now, they’re standing right on the edge of the frame with its eyes closed, looking like the most exasperated dad on a rainy camping trip I’ve ever seen. There’s another one doing some ruffly shit with its feathers! One just sorta looked at the camera and yawned! Puffins are great, y’all, and if the world ever starts to get you down, just sink into the world of Seal Island with the Puff-squad and let your worries melt away.