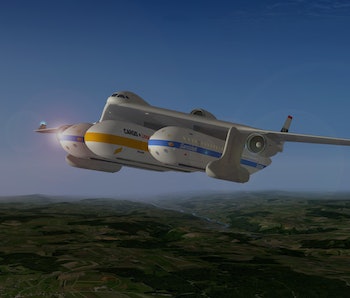 Switzerland’s Federal Polytechnic Institute is dreaming big with Clip-Air, a new concept that involves affixing cargo and passenger pods to elevated aircraft. The ultimate goal? Convincing the world that planes and trains are passé, and that the future belongs to pods.

Like many bold ideas, Clip-Air’s concept is currently heavier on the cons than the pros. It would only be convenient in a world with vastly different infrastructure. That said, the idea is straightforward and sensible in theory. Clip-Air wants to make planes without built-in fuselages. That makes total sense.

Whether the fuselage carries people or goods, it would not be bound to just skies and runways. Instead, the fuselages could travel by rail and road. And this also makes sense because people generally care much more about when they get to a place than how they get to a place. There is no longer a cultural significance to flying, and passengers can be sorted using software.

It’s hard to deny that, in practice, pod planes would be glorious. In this alternative reality, passengers would be able to hop on a fuselage-train or -bus, ride to the airport, and wait for the plane to scoop it up. The plane would then take off, arrive at the destination, and detach its pod. Airport personnel could then taxi the pods to the next railroad, and passengers would awaken in their destination’s hub. (The same would be true for cargo.) In effect, the concept streamlines the entire transportation process.

But optimism and positivity never go unbridled. First, the system would raise hell for agencies like the TSA (which already seems to exist in an inferno). Second, pod planes might not be particularly aerodynamic planes: Despite streamlining the transportation process, these Clip-Airs would be anything but streamlined themselves, which could lead to some hidden expenses.

Do we need a revolution in air travel technology? Perhaps, but we aren’t pod people just yet.