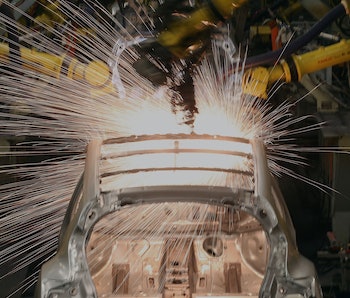 Automation is going to make universal basic income a necessity sooner rather than later, a White House panel discussed today.

“We need to start thinking about universal basic income,” Chase said, referring to the concept of a base-level of income each person would get just for being alive. “If people had that platform, that basic minimum, we could be tapping this much larger number of people to do things that can’t be automated,” like relational and social problems on the community level.

The roundtable discussion, called “Automation: How Robots Will Change the Ways We Work and Live,” focused on the idea that technology will start to kill off huge numbers of routine jobs in the near future — think five to 10 years, not 50, Chase said — thanks to deep learning.

The idea isn’t new, or even solely something out of science fiction. Switzerland recently voted down a monthly base income, and the owners of Y Combinator are working on an Oakland minimum income pilot program. And while Ford stood by a statement that better technology leads to a better life, and people “can never have too much technology,” the tone of the conversation overall trended toward bleak.

Part of the reasoning behind the basic income is that technology doesn’t make everyone wealthy at the same pace. San Francisco and Silicon Valley is a prime example of how technology makes the leading edge very rich, very fast, while the rest of the population stagnates.

“If you look at the period after World War II, we had advancing technology and the benefits were widely distributed,” Ford said. “But that’s not happening anymore. The fruits of progress are being captured by a small number of people at the top.”

“If you look at these trends,” he continued, “there’s every indication that it’s going to continue.”

Enter the universal basic income. People will be able to focus on creative skills and passions that computers can’t do (ignore Google’s algorithms that can make art) if people don’t have to worry about working dead-end jobs just to survive, Chase argues.

Automation is a job-killer, that’s no secret. A basic income could keep automation from destroying the economy and the entire way of human life. If, Chase says, climate doesn’t do it first.