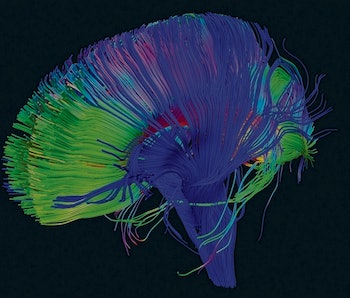 Using fMRI machines, researchers at Brown University have figured out how to create associations in their subjects’ brains without their conscious knowledge. In a Current Biology paper, the team describes a new technique that hijacks the visual parts of the brain to surreptitiously train it to associate colors with patterns. It’s a very specific approach to “telepathic” or Inception-style learning, but also a very applicable one. Associative learning is a major part of what the brain does. It’s the general process by which Pavlov’s famous dogs learned to drool on command. But it had not been documented in the visual parts of the brain until now.

“This is the first clear study that shows that V1 and V2 are capable of creating associative learning,” said Takeo Watanabe, the co-corresponding author of the paper in a press release, referring to the regions of the brain that first deal with information coming in through our eyes.

To study the phenomenon, the researchers first put their participants in an fMRI scanner — which visualizes changes in blood flow in the brain and took note of what happened in the V1 and V2 regions when their volunteers looked at different combinations of color and stripe orientations (such as vertical black stripes on a red background, or horizontal black stripes on a green background). The researchers goal was to train their participants to associate red with vertical stripes without their realizing it.

In a follow-up task, the participants were shown vertical stripes and then a white disk; afterward, they were asked to imagine ways to make the disk larger. If they figured out how, they were offered a reward. If the task seems arbitrary, that’s because it was: It was actually just a ruse for training the participants. While they thought they were getting rewarded for thinking creatively, they were actually just rewarded anytime their brain scans showed they were thinking about the color red.

After three days of training, the researchers found that the participants who had gone through the associative learning process were more likely to perceive a red background when shown vertical stripes. In other words, they were trained to see a color that actually wasn’t there. What’s more is that the training lasts: Five months after the initial testing, the associations were still very much in place.

In time, the scientists hope to use the technique — known as A-DecNef, for “Decoded Neurofeedback” — to train subjects to associatively learn things that are much more useful than associating colors and patterns. Here’s how DecNef researchers think it could be used in the near future: