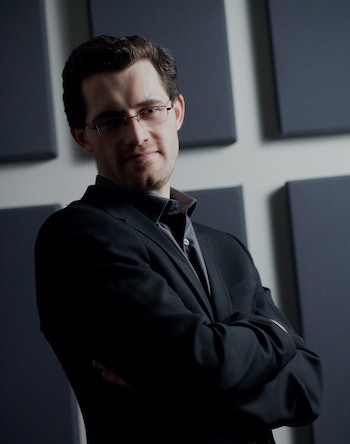 Job: Wintory is an award-winning composer of films and games, best known for his work scoring Assassin’s Creed: Syndicate, The Banner Saga, and Journey — for which he earned the first Grammy nomination for a video game soundtrack in history.

When you begin composing a score for a game, do the creators typically give you much guidance? Or do they just let you go?

In my experience, it varies. For example, in Abzû, I’m brought in in the very beginning. Creative director Matt Nava will give me the broad overview of what he has in mind for the game. Not musically, but he’ll say, “here’s the kind of experience we want to make, go find the musical translation of this.” Even on Assassin’s Creed: Syndicate, that was the same first conversation we had there. We sit down and start to dissect the overall concept that we’re after and build on it from there.

It might be silly to ask you if you have a favorite, but is there a game score you’ve done that most pleasantly surprised you?

Every game has unique aspects I cherish. Different games have done different things for me. I wouldn’t be able to rank them in terms of a favorite as a result. Journey, far more than any other game, radically altered the landscape of my career. Does that mean it was my favorite project? That doesn’t automatically translate. But there’s no denying that it changed my career. It’s still kind of incredible to me that any of that even happened.

How have you seen the game composing industry change during your time in it? Was it something you always had your eye on?

It’s certainly a lot more visible now. Things like live performances of game music has had implications for the whole rest of the industry, because the visibility has impacted soundtrack album sales. When someone says, “did you have your heart set on game scoring,” I had my heart set on being a composer, and I was a rabid gamer, so the two seemed to be on an inevitable collision course.

What’s been the biggest challenge of your career?

Learning where my limitations seem to exist and trying to develop techniques for pushing past them. I permanently feel like a student; I’m always learning. That feeling of growth and expansion of one’s mindset was not something that was in my thoughts when I first started this career. It’s not just, “today I want to write music better than yesterday,” because that doesn’t tell you how. That’s been the most recurring challenge. All the other challenges — like how to support myself doing this — were expected. “How do I get better and grow,” is far more nebulous.

For games with intricate worlds like Assassin’s Creed and The Banner Saga — do you have to do much research or play them a lot to figure out how to score them?

I had played all the prior Assassin Creed games, so in terms of starting from some kind of foundation, Syndicate certainly had its own quirks and challenges, but the basic familiarity of what makes an Assassin’s Creed game was deeply in my head from the start. Through the characters, I got a sense of what the score ought to be. I played it as much as I could; I flew to their office in Canada a few times so I could sit there and play the game. Towards the end of the project, I went up there and played for several days straight. We speed ran everything we could to really make sure all the music was behaving the way it’s supposed to. I’m a real stickler for making sure the implication is as bulletproof is possible. If your score is having to take a lot of independent variables into account, there are ways for players to inadvertently find some flaw and ruin it. Its not their fault, it’s your fault for giving them the ability to do that.

I am of the belief that the primary value that music can bring to a game is that the music is serving to advance the narrative. I am not a huge fan of music as purely mood or as establishing time and place. For example, there’s a sort of quasi neo classical vibe to the scores I wrote for Syndicate, and a lot of people posit that it’s to establish the Victorian London vibe of the game, but the truth is that’s not how I arrived at that sound. The vibe is communicated through the setting, but the score should be adding something that only score can add, which is largely subtext. This is true of Syndicate and games that are narrative in nature like The Banner Saga. The music is not trying to say, “this is the time, this is the location.” That’s missing the main power that music can provide. For Syndicate, the main question is: who are the characters and what is their outlook on life? What motivates them? What are they like?

What project are you most excited about right now?

I’m quite excited about Abzû. It is kind of like Journey in the sense that I’ve been involved from the beginning and asking myself, “how can I make this different from anything I’ve done before?” Journey is reflective and explorational, and subject to individual player interpretation. It had a lot of similar starting position ideas going for it, and I try to avoid that. Hopefully the players of the game will see it as something a little bit darker. Journey let me learn a lot about how to make a guided musical narrative within something that’s open-ended in its narrative, Abzû I’ll try to make more ambiguous.

On a conceptual level, it’s the same. I say, what kind of story are we trying to tell and what’s the subtext we can tease out of it? But fact that is no interactive element is different. I don’t regard them as the same overall, because we can’t understate the significance of the interactive element. That makes it distinctly its own art form and the most compelling art form in 21st century. By compelling I don’t mean that games are superior as a medium for storytelling than film — I’m simply saying they offer an experience not available elsewhere. And on top of that, we’re at the starting gate. By the end of the century, we’ll be looking back at games that were regarded as innovative and groundbreaking, and we’ll say, “that’s adorable they thought that was anything!” That leaves me breathless to just fantasize about. I don’t know what any other art form leaves me breathless about new frontiers.

The fact that I can’t predict with any confidence what’s going to happen in the world of games is why I find it so exciting. What excites me about the future is simply the future itself.