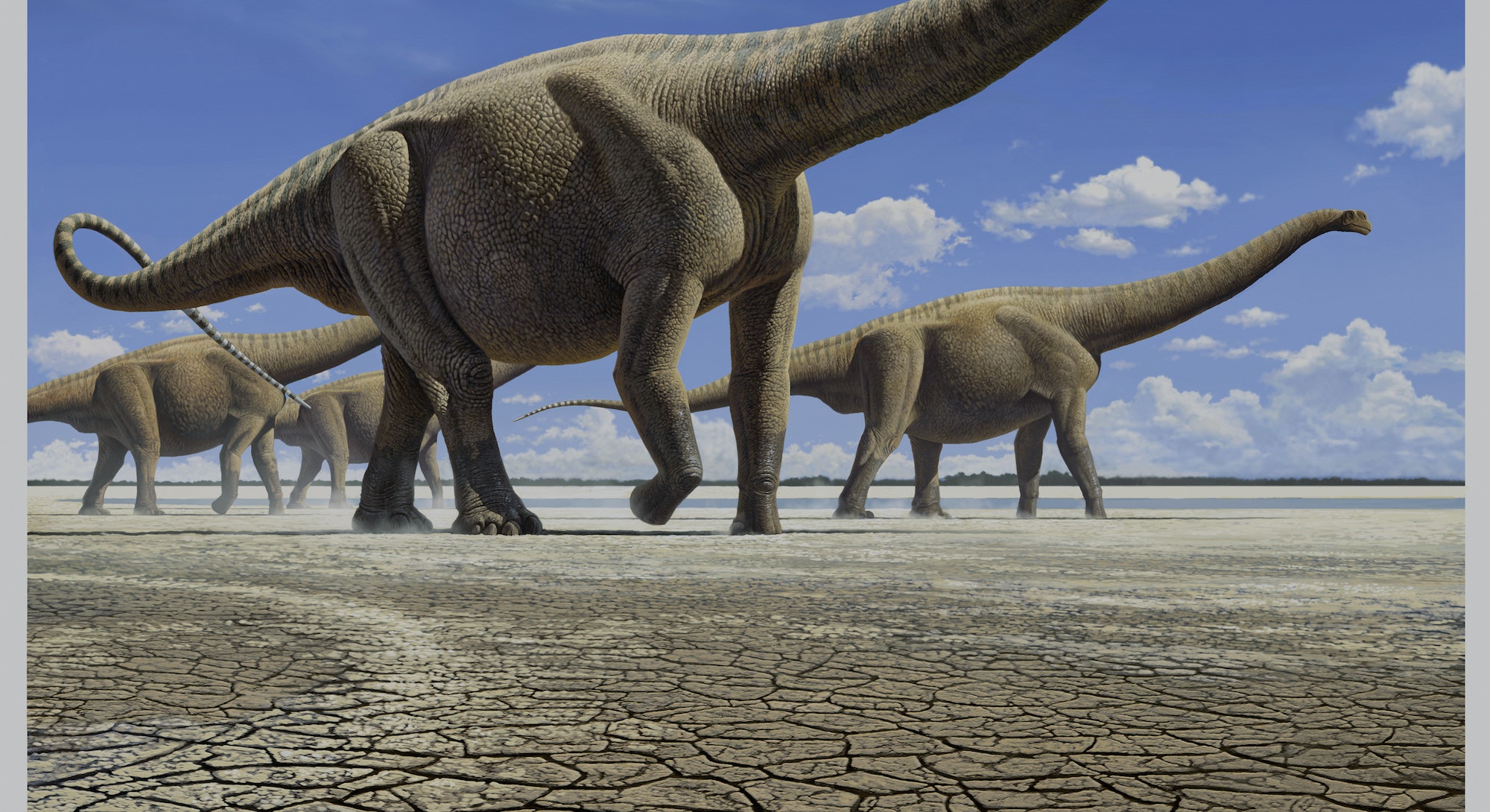 Nate Murphy and Cary Woodruff don’t agree about much, but they agree on this: Something of incredible scientific importance has been found on a Montana hillside. The remains of a 150 million-year-old sauropod dinosaur — part of one of the long-necked herds that clomped their way across North America’s Jurassic period — are being pulled from the limestone and mudstone on a private ranch near the Little Snowy Mountains. If the specimen isn’t an animal new to science, it’s still notable, making it worthy of discussion within the paleontology community. But ask a researcher about the find and they won’t want to talk about the bones. They’ll want to talk about Nathan Murphy and what exactly he’s looking for in those hills.

Woodruff, the director of paleontology at the nearby Great Plains Dinosaur Museum in Malta, Montana, worries that the bones are now in the hands of a commercial fossil hunter and, as such, will go unexamined by a real paleontologist and lost, after a bidding war, to science forever. Murphy, who runs the Judith River Dinosaur Institute, a private company that finds, excavates, and prepares fossils, insists this concern is preposterous. Murphy says that paleontologists are too quick to dismiss him and his find, which he describes as “spectacular.” Sure, he has run both week-long dinosaur dig programs for dinosaur lovers and afoul of the law, but he knows what he’s doing.

“We can tell that it is an animal that has never been described, because that one vertebra has features never seen in another sauropod,” Murphy tells Inverse. He estimates the length at about 110 feet. “It’s the biggest dinosaur ever found in Montana, by a long shot. It’s going to rival a lot of these dinosaurs that have been found in Colorado and Utah. But we’ll see. We’ve got to dig it up first.”

Woodruff, who happens to be a sauropod specialists, does not believe that Murphy’s sauropod — nicknamed “Big Monty” — is spectacularly big. At roughly three feet long, the single vertebra pulled out of the earth so far is large, but nothing special by sauropod standards. He also doesn’t believe Big Monty is an example of a new species. He and at least one other sauropod specialist interviewed for this article have independently identified the animal as a member of the genus Haplocanthosaurus. But this does not dull Woodruff’s enthusiasm about the find (“It was like, ‘Oh my gosh, a Haplocanthosaurus in Montana!’’).

Murphy is, by most accounts, an experienced fossil hunter with a real passion for dinosaurs and an extraordinary talent for finding their remains. He is credited with finding a duck-billed Brachylophosaurus dubbed Leonardo that has the distinction of being the best preserved dinosaur ever found. He’s famous for that, but not just for that.

Murphy is also well known for being a convicted fossil thief. In 2009, a judge sentenced Murphy to 60 days in jail for taking a raptor fossil off of a private ranch. He had permission from the landowners to dig on the ranch, but had not been informing them of the bones he was finding there and taking to a fossil preparation lab off-site. He told different stories at different times about where a raptor skeleton had been found, according to reporting by the Billings Gazette. A judge found that Murphy’s actions clearly showed evidence of “criminal thinking and criminal conduct” and reprimanded him thoroughly, saying that “a lie and deception in this field of paleontology really means that chapters in the history of this planet have missing pieces.” The judge was particularly angry about Murphy’s failure to collect valuable scientific data and document where and how his fossils were found.

Murphy also pled guilty to taking fossils from federal land adjacent to the ranch, where he did not have permission to dig.

In a sense, Murphy’s credibility problem is contagious: Woodruff’s assessment of the specimen is a best-guess based only on a few photos and news reports. He and his colleagues have not seen the bones in person. And that’s a strange thing if you think about it. The local sauropod expert has not inspected the local sauropod discovery.

If what’s happening in the Little Snowy Mountains right now is a unique paleontological event, it’s also a flash point in the long-simmering conflict between academic paleontologists and commercial fossil hunters in the United States. At its core, the question is about what makes dinosaur remains valuable and how that value should be exchanged into American dollars.

Murphy used to sit on the board of the Judith River Foundation, a non-profit group that ran the Great Plains Dinosaur Museum, where Woodruff now works. That relationship fell apart shortly before Murphy’s trouble with the law began. In a four-part investigative series published by the Billings Gazette, former allies and associates describe either suddenly or gradually losing the faith they had placed in Murphy under mounting evidence of a web of deception that extended beyond his work as an amateur paleontologist and into unrelated and fabulous biographical details of his life. That said, Murphy’s talent checks out. The museum holds a cast of Leonardo and the bones of “Ralph,” a sauropod unearthed on the same ranch where Murphy is digging now, which was donated by the landowners.

Perhaps it’s because of his success that Murphy takes the rejection of the scientific community so personally. He points to a long list of impressive specimens found by commercial fossil hunters that now reside in public museums, when the subject of compensation comes up. He points out that his contributions to paleontology are demonstrable, which they certainly are.

But it’s not as simple as that. The conflict between commercial fossil hunters and academic paleontologists goes all the way back to 1877, when prospectors headed west and found dinosaurs instead of gold. It was a buyers market, composed of only two wealthy paleontologists with the interest and means to make purchases, and they used that fact to their advantage to get favorable prices. As more people became fascinated with dinosaurs, however, the balance of power shifted. Well-endowed natural history museums did not wish to compete against each other for the best collection, and by the early 20th century began to employ their own teams of fossil diggers to ensure a steady supply at a guaranteed price.

The current wave of interest in fossils has sparked anxiety among the paleontological community that the best specimens will end up as art pieces the foyers of Palo Alto, Hollywood, and Jackson Hole where they’ll be inaccessible to scientists and the public. The panic reached a fever pitch with the sale of a Tyrannosaurus rex named Sue for $8.4 million in 1997. The dinosaur sold to The Field Museum in Chicago, backed by McDonald’s and Walt Disney, after a fierce bidding war.

American paleontologists have done what they can to stake their claim to the fossil treasures unearthed in this country. The Society of Vertebrate Paleontology officially condemns all sales of scientifically interesting fossils into private hands. It’s an awkward position to take, when the society’s membership includes commercial fossil hunters who also consider themselves dedicated to the science. Many of the top paleontological journals will not accept articles if the specimens described are not in a public museum. The justification is that objects must be accessible for verification and future research, but not all disciplines draw this firm of a line. It’s a principled stance and a problem because it means privately held bones are all the more likely to avoid scientific attention.

Woodruff worries that will be the fate of these sauropod bones, that they will never be described in a peer-reviewed journal and that, as far as science is concerned, their discovery will remain irrelevant. “It is a very, very rare and exceedingly scientifically important dinosaur,” Woodruff says. “And that’s extra sad because, unless some previous arrangement has been worked out, that means all of the science on this specimen has been lost, and in all likelihood, no paleontologist, no scientist will ever see that material.”

Murphy could not or would not produce an agreement confirming that Big Monty the sauropod will end up in public hands, but he insisted that both he and the landowners are committed to seeing it and other important specimens end up in museums. “Every dinosaur I have ever found is in a museum, and all of them were donated,” Murphy says. It’s a reassuring statement that likely excludes individual bones, teeth, and claws found and sold by his son on eBay. There’s also reason to believe that some fossils remain in Murphy’s possession and may or may not move on to find another home at a later date.

Woodruff isn’t taking Murphy’s word for anything until there is documentation.

“And it’s not good enough to demand a price from museums and refuse to sell for lower,” Woodruff adds. “I know it may sound extreme to say, ‘Holding these fossils for ransom,’ but that’s probably analogous to the fact.”

Murphy takes the opposite position — that academic paleontologists are leveraging public goodwill to rob the folks doing the actual work of finding and digging up the fossils. “It’s amazing to me that some scientists don’t believe that they can afford to purchase the specimens when a museum doesn’t think twice about chucking in a couple million bucks on Judy Garland’s ruby slippers,” he says. “Extinction of the American Fossil Hunter,” Murphy wrote in the subject line of a follow-up email.

“I wish there were a middle road,” he said.

Certainly, it seems that both the scientists and the private fossil dealers lose out as a result of the ongoing stalemate. Commercial paleontologists argue rightly that fossils left in the ground are lost to erosion and putting a price on them ensures that as many possible will be recovered and preserved. On the other hand, the more monetary value a fossil carries, the higher the incentives for falsification and forgery; bones lose their scientific value.

It’s not hard to imagine a partnership that could benefit all parties, but the details of the arrangement would depend heavily on who is making the rules. The academics might say that they will work with commercial fossil hunters, verifying their finds in exchange for guarantees that specimens go immediately to the care of museums for a nominal fee. The fossil hunters would likely scoff, and reply that the scientists are welcome to inspect their discoveries but they must retain the right to sell them to the highest bidder — public or private — who will commit to allowing scientists to view the specimen on occasion into the future.

Without an arbiter of this dispute, the academics have in large part simply refused to deal with commercial operations and tried to build a wall to separate the two. “It may look wonderful, it may look like it’s an amazing thing, but unless it is collected scientifically, we actually have no proof of its authenticity,” says Woodruff. Fossil hunters have countered by undermining the monopoly over the process of scientific knowledge itself. In 2007 the Association of Applied Paleontological Sciences (formerly the American Association of Paleontological Suppliers) started the Journal of Paleontological Sciences, a publication it said would meet standards of academic vigor and peer review, while offering an outlet for commercial hunters to write about their finds, even if — under certain conditions — they remain in private hands. (The experiment does not appear to be making much headway; it has published just five articles online since its debut.)

The journal’s tagline is “paleontology in the spirit of cooperation,” and its stated goal is to create a sort of amnesty between the academic community and commercial operations. From where Woodruff is sitting, that seems unlikely to work.

“If I can speak on behalf of all vertebrate paleontologists, what is very upsetting to us these days is this pseudoscience that commercial collectors try to promote,” he says. “Outfits like this are destroying the science.”