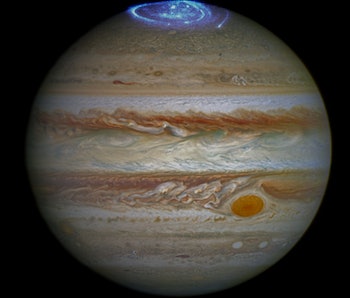 Proof? Thursday marked the unveiling of the awesome image of auroras forming above the atmosphere of Jupiter’s pole.

Jupiter — like many other celestial bodies with an active atmosphere — is adorned with its own fair share of auroras. Known here on Earth as the Northern and Southern lights, auroras are extraordinary light shows caused by high energy particles hitting the atmosphere and crashing into gaseous atoms.

Scientists are interested in learning more about the extreme atmospheric chemistry of Jupiter and how the red planet’s auroras respond to solar winds. NASA’s Juno spacecraft, inching closer and closer to Jupiter, is set to insert itself into the planet’s orbit on July 4. Hubble and Juno will work together to take a closer look at auroral behavior on the planet: the former will take images from afar while the latter will measure solar winds that gust into the atmosphere. Combined, NASA scientists will use the data to determine exactly what lets Jupiter exhibit such intense auroras.

“These auroras are very dramatic and among the most active I have ever seen,” said Jonathan Nichols from the University of Leicester, UK, and principal investigator of the auroral study, in a news release. “It almost seems as if Jupiter is throwing a firework party for the imminent arrival of Juno.”

Jupiter, in particular, possesses an insanely strong magnetic field that can grab charged particles up from farther away — creating a very violent radiation environment that encases the planet. This makes auroras at the poles unusually intense. (Then again, everything about Jupiter is pretty intense.)

Meanwhile, Hubble is going to be observing Jupiter for an entire month. The telescope will be snapping up images not just of the planet’s auroras, but also of other atmospheric occurrences that may or may not be a result of Jupiter’s solar wind activity. More Jupiter aurora photos, we’re ready for you.

More like this
Science
5.12.2022 3:38 PM
Look! Astronomers capture the first-ever image of the Milky Way's black hole
By Doris Elín Urrutia
Science
17 hours ago
70 years ago, the world united for a monumental scientific project — and kicked off the Space Race
By Doris Elín Urrutia
Science
13 hours ago
Look: ESA captures remarkable images of a “hedgehog” structure on the Sun
By Jennifer Walter
Related Tags
Share: