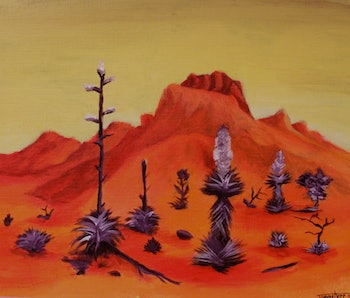 There’s something about mescaline.

Prehistoric desert dwellers of the American Southwest and Mexico figured as much out when they figured out that eating peyote — the small, spineless cactus dotting the barren landscape — could get them on a trippy otherworldly adventure. Native North Americans have been eating peyote buttons in spiritual rituals for over 5,700 years, later passing down the tradition through a centuries-spanning succession of American white guys seeking a weird-but-relatively-mild spiritual night out.

The name “peyote” is thought to stem from either the Nahuatl word for “glistening” or “Divine Messenger,” both of which are not inaccurate associations to make with the peyote-eating experience. As for what that glistening, divine messenger of wild visions exactly is? It’s Mescaline, the plant’s naturally occurring psychedelic alkaloid, famous for inducing hallucinations, spiritual awakenings, and metaphysical insights as well as the equally heady art it’s been known to inspire.

In 1896, the Aspen Daily Times ran an article written by a bunch of awestruck and slightly racist mescaline-eating bros, who described having visions of the “ever different panorama of infinite beauty and grandeur” and “brilliant and ever changing colors” after they acquired and ate a bunch of peyote buttons from a group of Kiowa Indians. Exploration of psychedelic trips became even more widespread in the 21st century, when slightly more woke white dudes, like Hunter S. Thompson, discovered the influence mescaline had on their art. Thompson went on to describe his virginal peyote trip in the book First Visit With Mescalito, melodramatically warning readers: “We live in a jungle of pending disasters.”

When Don Henley of the Eagles tripped on peyote during a photo shoot at Joshua Tree in 1971, a year before his band’s classic self-titled album hit the charts, the drug helped him facilitate — albeit temporarily — a “different way of seeing the world,” as he told Rolling Stone this year. (He also admitted that some of his companions threw up: “So, I’m not recommending what we did, back then, to anybody.”)

What Henley, Thompson, and countless Native Americans were experiencing was a neurological trip not unlike that triggered by other chemical hallucinogens. Mescaline, not unlike MDMA, is a serotonin receptor agonist: When it enters the brain, it triggers a chain of events that ends in the release of happy-making serotonin, a neurotransmitter, from brain cells.

Specifically, molecules of mescaline bind to a set of receptors on central nervous system cells dubbed GPCRs, which are known to be involved in processes like anxiety, cognition, and aggression along with memory, sleep, mood, and — as Henley’s friends discovered — nausea. It isn’t exactly clear how the excess serotonin leads to the drug’s psychedelic effects, but scientists, like the ones who published this 2009 study, think it has to do with neurons in the brain’s prefrontal cortex becoming excited.

Mescaline is considered by scientists to be the most mild of the “classical” hallucinogens, somewhere between 1,000 and 3,000 times less potent than LSD and 30 times less potent than psilocybin. Its relative mildness (and bitter taste) might be the reason why it’s not considered particularly addictive — and why there’s a dearth of clinical studies on the drug. Psychedelic advocates and haters alike have trippier fish to fry.

In today’s festival drug oeuvre, mescaline — like the memory of the Eagles and the thrill of gonzo journalism — has been resigned to a tamer and sweetly weird older generation. According to a survey of common drugs at festivals released last year by DrugAbuse.org, if you’re going to find mescaline at any of the summer’s events, it’s going to be at the psychedelic-heavy Burning Man or Electric Daisy Carnival. But even those attendees are likely to opt for the hallucinogen’s more potent counterparts.