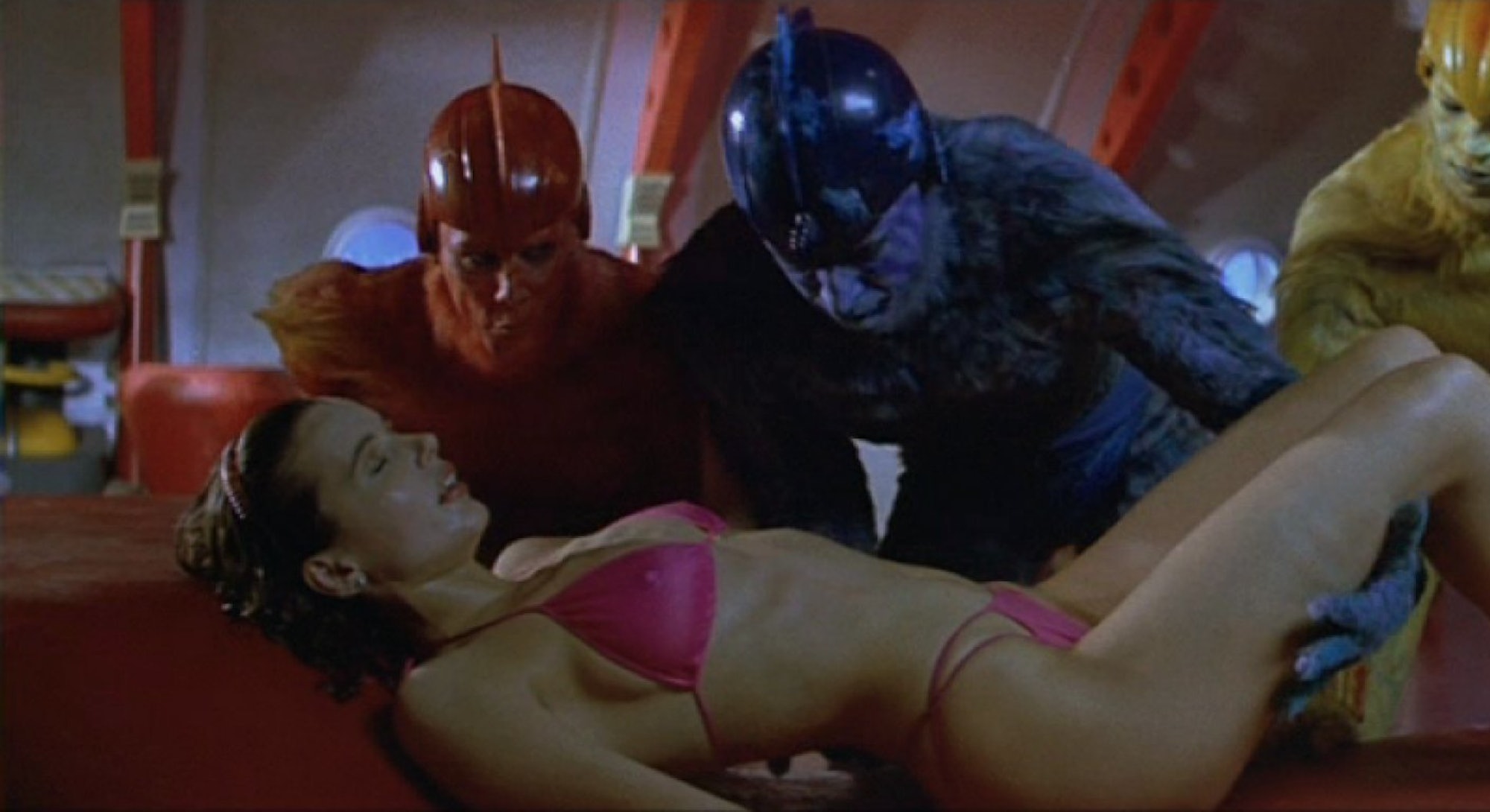 Alien-human sex appears frequently in film, and can be either the stuff of comedy or the stuff of nightmares. This makes sense, since human sexuality is vast and complicated, and we tend to find sex fascinating, hilarious, and horrifying with varying degree. We also love to speculate about how aliens might have it. The concept of aliens reproducing through different mechanisms than humans is the root of most alien sex horror. Consider the grisly, twisted eroticism of Alien, which terrifies, in part, due to the twisting and erasure of gender.

Sex is often part of the full submission of the human race, as we see in stories like Lilith’s Brood, which position human woman as sex objects or “breeders”. These stories usually have a feminist angle, as sex and childbirth has been a big part of the enslavement of woman in our very real history.

Of course, the possibility that aliens could impregnate men is also a present terror, since men hate to imagine childbirth could happen to them too. Yet like anything, there is a small subset of humanity that is actually, kinda into it.

Alien fetishes are real, and they’re out there. Sometimes called xenophilia or exophilia, sexual attraction to extraterrestrials comes in a variety of forms and intersects with a few other fetishes. While there are people out there who claim to have had sex with aliens, most exophiles are not abductees. Just like non-kinky alien enthusiasts, their interests don’t necessarily overlap with real believers.

Unlike robots or other man-made tech – also subject to fetishization as possible sex objects – aliens can be imagined as sentient, consenting sex partners with similar levels of intelligence and emotional savvy. And since these aliens do not, as far as we know, exist, they are still malleable objects of fantasy. Part of the appeal and the curse of an alien fetish is the sheer impossibility of it. Sometimes it remains purely fantasy, but sometimes it can be partially acted on or recreated.

Just about a year ago, the internet had a minor freakout over a [Brand New!]((http://www.phillymag.com/g-philly/2015/08/17/newest-sexual-fetish-getting-alien-eggs-laid-inside-you/) alien egg laying fetish. The fetish was actually nothing novel, but a unique new sex toy called an ovipositor was suddenly making it more possible (the most popular and disgustingly named model is the Splorch). The toy “lays” gelatin eggs in the orifice of choice, allowing the user to then “lay” an egg themselves. (This egg fetish is, apparently, not exclusive to alien fetishists, nor is it something all exophiles share.)

Hollywood being what it is, when the aliens are female they cater to a male fantasy. Aliens that look like human women often seduce hapless human men to further their own agendas, like Zsa Zsa Gabor’s character in Queen of Outer Space or the Species series, playing into the trope of the sexually empowered woman as villain (sound familiar?). Otherwise, they are malleable ingenues, their lack of sexual knowledge played for laughs while their bodies exist to titillate, like Kim Bassinger in My Stepmother Is An Alien.

A male fantasy of a sexy alien is not that radical; the same narratives exist about human women. Human-alien sex or romance can exist as long as the girl alien is slender, shapely, and has something like boobs. On the other hand, aliens in the form of human men can be protagonists, like David Bowie in The Man Who Fell to Earth.

Aliens can appeal sexually to anyone, simply because they are not real, and can be imagined to fulfill any desire. In fairness, there isn’t a huge overlap between the fantasies of alien fetishists, which often involve non-human anatomy, and the portrayal of human-alien sex in movies, which requires the aliens to remain very humanoid.

But then, every once in a while, an alien comes down from his distant planet to satisfy a female fantasy. Earth Girls Are Easy starred Geena Davis, Jeff Goldblum, Jim Carrey and Damon Wayans. The three men play randy aliens that crash land in Valerie’s (Davis) pool. They are furry and ridiculous looking, but magically clean up into pretty cute dudes, and because this was 1988, everything is neon colored and there is disco and musical numbers.

For all its silliness, Earth Girls Are Easy acknowledges female sexuality in such a way that isn’t often visualized on screen, the female gaze as the equally objectifying inverse of the male gaze. Mac (Goldblum) represents an ultimate female fantasy, and not just because he looks like young Jeff Goldblum. In contrast to Valerie’s philandering doctor fiancée, Ted, Mac offers her pure attentiveness, rarely talking and never taking his eyes off of her. While the PG movie doesn’t delve too deeply into their sexual dynamic, it’s implied that this attentiveness translates in the bedroom as well.

Even more importantly, Mac has the power to make her desire him, but instead he uses it to try to help her and Ted stay together, because he believes that’s what she wants. It’s only then that she is certain she’d rather head off to a distant galaxy with Mac than spend another minute with lame-ass Ted.

It’s no wonder that some women imagine an alien invasion as an opportunity rather than a terror. Ultimately, what makes aliens sexy to some of us is the very same thing that makes them terrifying; they are a blank slate of possibilities. While some popular tropes prevail, we are still free to imagine them in any way we wish. An alien is, by definition, something that a human has never encountered before, so it makes sense to imagine they could fulfill a desire that seems unfulfillable – whether that is eggs all up in their body, or just some damn attention.