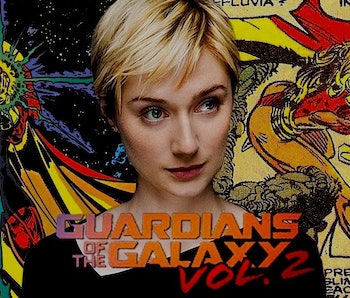 So far, Guardians of the Galaxy Vol. 2 has given us precious little as what to expect of plot. This week, filming wrapped and Marvel offered us this official synopsis:

“Set to the backdrop of ‘Awesome Mixtape #2’, Marvel’s Guardians of the Galaxy Vol. 2 continues the team’s adventures as they traverse the outer reaches of the cosmos. The Guardians must fight to keep their newfound family together as they unravel the mysteries of Peter Quill’s true parentage. Old foes become new allies and fan-favorite characters from the classic comics will come to our heroes’ aid as the Marvel cinematic universe continues to expand.”

That means there’s still no hints about the mysterious villain Ayesha, played by Elizabeth Debicki. Her comic book history doesn’t actually cross with Guardians of the Galaxy, so her role is really anyone’s guess at this point. But there’s one important thing about Ayesha that, coupled with the first film’s brand of humor, makes us think this sequel is going to be a raunch fest. Ayesha, above all else, wants to have sex.

The key detail her is going to be her quest for “the perfect mate”. It’s what drives Ayesha (or Kismet, or Her) throughout her story arc, first in her efforts to find Him (Adam Warlock) and then later to find a suitable substitute. See, Ayesha is driven above all by her desire to reproduce her perfect superhuman biology, to create a super-Aryan super race of lil’ Hims and Hers. In order to birth a new race, you need to make out with a suitable dude.

Now, a large part of her story involves the quest to find her male counterpart, Adam Warlock, but that all culminates with him being, well, dead. Revolving the plot around, trying to stop her on a mission that fails anyway, would be pretty lame. Warlock is killed battling Thanos, and there we find our connection with Guardians of the Galaxy. Thanos, of course, was the bigger baddie behind Ronan, and also Gamora’s adoptive father, whom she betrayed by joining the Guardians. Even though they’re promising “old foes will become new allies”, it seems like a stretch to imagine Thanos and Starlord buddying up, especially considering Thanos is going to be the big bad in Infinity War down the line. So introducing Ayesha as an enemy of Thanos would put her and the Guardians on approximately the same side.

(There was some early speculation that Warlock would be Starlord’s father, but that’s been well put to rest by Marvel canon, with the casting of Kurt Russell.)

It’s looking much more likely that we will see her set her sights on Starlord, stopping at nothing to claim him as her mate. This would play perfectly into the comedy style of the first film and the characterization of Starlord as, frankly, a space bro. Remember the pink alien girl, with whom he hit it and quit it, before she even left his ship?

Her powers, too, are pretty impressive. She can manipulate cosmic energy to use as a weapon or power source, she has superhuman strength, speed, endurance (hey-o!), reflexes, and is ostensibly immortal. We hope Debicki is ready to get weird in this role, because Ayesha is a total wildcard, with little to lose, cruising the galaxy for a mate while not really giving a shit about anyone else.

Ayesha pursuing Starlord would certainly cause an internal rift in the Guardians, especially between Starlord and Gamora, who had a budding romance thing going on in the first film. I, for one, can’t wait to hear what Groot has to say about this.

Even if it doesn’t shake out exactly this way, we fully expect Guardians of the Galaxy Vol. 2 to be a raunch fest with a copulation-driven villain like Ayesha. She’s not exactly a progressive female character to add to Marvel’s Phase 3 diversity boost, but at least Ayesha is sexed up in an unconventional way.