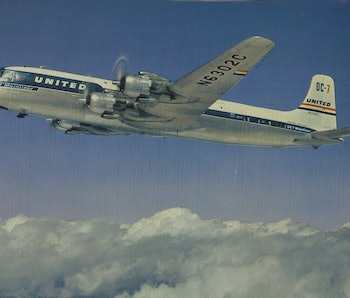 Today we worry about drones flying too close to airports and noise regulations around intercontinental Supersonic jets, but not so long ago there were few agencies and regulations concerned about passenger planes.

Yes, there was Air traffic control, but the technology was rudimentary in comparison to today and pilots relied on their eyes to avoid mid-flight collisions. That all began to end 60 years ago today when two planes collided over the Grand Canyon, killing all 128 people aboard in the worst aviation disaster of its era. Around 10:30 a.m. Pacific time on June 30, 1966, the planes collided mid-air. It led to sweeping reforms in air traffic regulation.

Today, we still debate pilot proficiency in the air, but now they are compared to automated systems and robots that are essentially taking over. A 2015 survey showed that pilots of Boeing 777s on average only spent seven minutes flying the plane manually and pilots of Airbuses are half that.

Despite a number of high profile plane crashes in the past year, autonomous flight is proving an extraordinarily safe way to travel. In 2015, there was only one death per 5 million flights globally caused by accidental crashes. That historically low death rate owes a lot to this crash that happened over the Grand Canyon 60 years ago.

A United Air Lines Lockheed L-1049 and Douglas DC-7 each departed from Los Angeles International Airport within three minutes of each other, the former headed for Kansas City and the latter to Chicago. In the pre-flight instructions, it was planned that the two craft would pass each other over the Grand Canyon but were supposed to be at different altitudes.

Thunderclouds started forming and the captain of the DC-7 requested to fly 1,000 feet above the foul weather, which enables the pilot to fly by visual flight rules also known as “see and be seen” rules. The request was approved.

No one knows what happened in the last moments before the collision, but it’s believed the two crafts may have fudged their altitudes in order to give passengers a better view of the canyon — a common practice at the time — and didn’t see each other as they flew through and around cloud banks.

Hundreds of lives and families were destroyed as a result of the crash, including Ray Clark, the son of United Airlines passenger Leon David Cook Jr. Ray’s mother drunkenly drove off a bridge 14 years after the crash, his brother committed suicide at 37 years old, and he himself struggled with alcoholism for 25 years before breaking free.

But there is a silver lining: because of the crash and the public concern raised for aviation safety, a year later President Dwight D. Eisenhower signed the Airways Modernization Act. Even that didn’t do enough given that two other more mild mid-air collisions stirred public outrage, so Eisenhower in 1958 signed the Federal Aviation Act, which established what we know today as the Federal Aviation Administration (FAA).

Today, the agency is focused on its NextGen program to update airport air traffic control towers with the latest technology and generally advance technical capabilities in the air and on the ground. But there is still more work that could be done to protect airports and airplanes from intentional attacks given that for two years now intentional attacks on airplanes has surpassed deaths from accidental crashes.