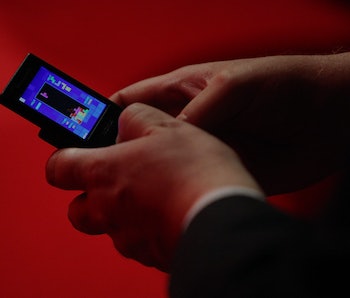 You probably haven’t heard of the Tetris movie, or if you did you didn’t quite believe it was actually going to happen. What’s the story to tell? Well, apparently, there’s a whole lot of story going on. Too much, in fact, so now we’re getting a trilogy of Tetris films.

“That’s correct,” filmmaker Larry Kasanoff, who’s spearheading the project, told Empire in an interview published Monday. “Purely because the story we conceived is so big. This isn’t us splitting the last one of our eight movies in two to wring blood out of the stone. It’s just a big story.”

Movies based on video games don’t have the best track records. Tom Clancy’s The Division had a weird tie-in that sucked, but even big budget attempts like Warcraft and Prince of Persia sucked. A film about falling blocks does not sound like one that will buck this trend.

“We’re not going to have blocks with feet running around the movie,” Kasanoff said. “It’s great that people think so. It sets the bar rather low!”

Nonetheless, Kasanoff sounds like he’s in high spirits. Nobody has made any public claims that suggest they know what the film will be about, which could be a good sign if you’re an optimist. “No-one has come remotely close to figuring out what we’re doing,” he said.

“We want the story to be a surprise, but it’s a big science-fiction movie,” Kasanoff said. “I came up with the idea as I was thinking about Tetris and the theme of creating order out of chaos.”

Creating order out of chaos is, of course, what Tetris is all about. Making blocks fit together to make rows so that they disappear. Perhaps this Tetris trilogy is only loosely based on the game, and actually involves some sort of love triangle. Or rather, love tetromino.