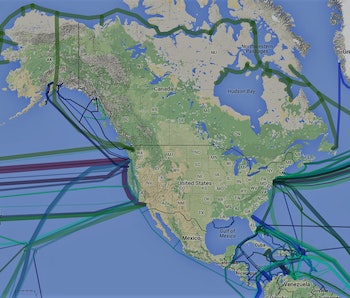 It’s easy to forget about the submarine cables that lie beneath our oceans, but without them, the world would come to a standstill. The cables that connect six of the Earth’s continents are vitally important, accounting for more than 95 percent of phone calls, internet service, and data traffic between the United States and the outside world, as well as a huge amount of money.

“They are responsible for $10 trillion worth of transactional value every day,” Commissioner Jessica Rosenworcel said during a monthly Federal Communications Commission meeting today. “That is more than triple what the United States spends on health care annually. It is greater than the combined domestic product of Japan, Germany, and Australia. It is a big deal.”

Last summer, on July 8, 2015, a typhoon ripped through the Pacific Ocean and damaged one of these submarine cables. According to FCC Chairman Tom Wheeler, for months, it left tens of thousands of U.S. citizens in Pacific islands unable to use a credit card, withdraw money from an ATM, or make a phone call even to 911. Today, the FCC decided that the security and maintenance of the underwater cables had been ignored long enough, and enacted a new rule it hopes will help prevent disasters like the July 2015 outage.

The new guidelines aren’t just aimed at natural disasters — their purpose is to help the FCC respond to any threats to the cable’s connectivity, be they natural or man-made cyberwarfare attacks. While the 2015 breakdown was undoubtedly inconvenient for thousands of Americans, it appears it served as a huge wake-up call for the FCC.

“Consumers suffered because the cable licensee had no backup plan,” Wheeler explained. “It did not automatically reroute the traffic. It did not even notify the FCC it had suffered a complete loss of communication.”

After today, the new system requires operators of these cables to report connectivity degradation of 50 percent or more that lasts at least 30 minutes to the Network Outage Reporting System. The NORS is the same national system that land-based communication infrastructure systems such as landline phones, wireless networks, and satellite communications must report to.

It used to be that cable systems reported voluntarily, but Wheeler says some companies weren’t stepping up when they had problems — seven of the 60 undersea cable operators failed to voluntarily report problems under this system.

“In an interconnected world, commerce and national defense depends on undersea connectivity, and it is irresponsible to turn a blind eye to that,” Wheeler said.

Rear Admiral David Simpson, chief of the Public Safety and Homeland Security Bureau, also raised concerns about the security risk an attack on these cables would pose. He urged that this new alert system would enhance Homeland Security’s ability to respond to cyber threats as well as weather disasters, especially since cables are often geographically clustered.

Despite their faults, physical cables are still the strongest links between the online world. You can see a full interactive map of all the cables under water now, with more on the way — last month, Facebook and Microsoft got into the game with a planned 4,100-mile cable underneath the Atlantic.

You can read the FCC’s full statement below: