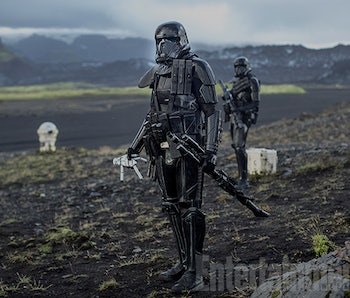 It seems like Entertainment Weekly is the go-to spot for Rogue One news this week, as the publication has been dropping some much-needed new tidbits about director Gareth Edwards’s upcoming Star Wars standalone movie. The mag most recently received a wave of bad press because everybody thought a gigantic movie going back for reshoots was a new concept, but it’s good to see Lucasfilm try to right itself again with some peeks at new details. EW just released a new batch of images, and one of them has us scratching our heads.

EW posted new individual character breakdowns and some fascinatingly contradictory images of Imperial Stormtroopers hanging out on the beach of some unknown galactic South Pacific planet. But the weirdest of the lot shows the newly christened Death Troopers hanging out in an unnamed tundra planet, and one of them is holding what looks like a stormtrooper doll.

According to EW, “The filmmakers didn’t want to explain exactly what’s happening here, but they confirm: yes, that’s a Stormtrooper doll, a galactic version of a toy soldier. And it will have special significance in the story.”

It looks as though the Star Wars merchandising machine has gotten so crazy that even the characters in the new movies are into buying (or maybe making?) Star Wars action figures. Real life worldwide retail sales of licensed merchandise rose by 4.2 percent last year to a whopping $251.7 billion all because of Star Wars. Maybe the Empire decided to get into the merchandising business to get some extra Galactic Credits to fund the Death Star program led by Ben Mendelsohn’s evil Director Orson Krennic character.

Maybe the special significance is that hey, even Death Troopers need to get their kids gifts of some kind, and they might as well get them some rinky-dink doll before they pack up and ship off to some far flung locale to crush the Rebel Alliance. It’s too bad the old Death Troopers take their vacations in what looks like Star Wars Iceland instead of that tropical Star Wars Bahamas the regular Stormtroopers get to hang out in.

Weirdly enough, this is the second new Star Wars movie to feature a character with a doll. In her hollowed out AT-AT on Jakku, Rey fashioned herself a Rebel pilot doll out of god knows what. But she’s a Force-sensitive scavenger, so she did her own thing.

Rogue One flies into theaters later this year, on December 16.