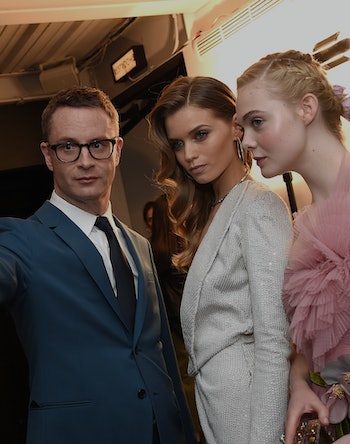 Being in a room with Nicolas Winding Refn is like being circled by a peckish shark. The Danish filmmaker – in Manhattan to promote his icy showbiz nightmare – The Neon Demon, does not so much invite you in as accept your presence. After instructing you to take a seat on the sectional sofa, he paces around the room, answering your questions, but never once sinks to your level. He remains seemingly deep in thought, but it’s not clear he’s thinking about the conversation you’re having.

In short, he acts like a character in one of his films, which have of late been dominated by quiet remove, deliberate (read: slow) pacing and the sudden shocks of piercing dialogue and hyper-violence. After breaking out in America with 2011’s now-cult classic Drive, which featured Ryan Gosling as a near-mythical getaway driver without a name or a history, he moved on to Only God Forgives, which pushed Gosling deeper into a criminal underworld but eschewed all the quasi-superhero, forbidden-love-story elements that helped make Drive such a fan-favorite.

The Neon Demon, baked in light and cold to the touch, stars Elle Fanning as a young, outwardly naive model who blossoms into a monster of the fashion industry’s creation. It’s quiet, understatedly funny, and fills viewers with dread and guilt about their part in the beauty-industrial complex. But Refn’s film, as he told Inverse, isn’t so much a condemnation as it is an examination — or even a celebration — of our vapid culture. Refn spoke with Inverse about The Neon Demon, his vision for the future of film, and embracing the dark side.

Before we talk about Neon Demon, I have a burning question: Was it wrong to see Only God Forgives as a comedy?

There was a lot of humor in it, of course. You were right on, you were futuristic.

There were so few lines, and they were so specific. Did you feel like people missed that part?

I don’t have an agenda in how people should or should not react, I’m more interested in how they do react.

But you were worried, as your wife’s documentary about the film’s production reveals, that it wouldn’t live up financially to Drive, that people always wanted the same thing. So you were worried to some degree about the reception to it.

I wasn’t worried so much about the reception personally, I was worried about the economics, because what really drives this business is money. So I just had to make sure it made money, which it did, thank god. When you knowingly go into destroy something that had been universally loved, by doing something completely different, it’s always scary. But it’s the only way to continue.

So by doing Only God Forgives, it was destroying Drive in a way.

It wasnt destroying Drive, I was just doing something very, very different.

American audiences like the same thing over and over again.

I think it’s the general idea, that people want the same thing over and over again, because they know what they’re getting. Or we as creators have a formula that we can just repeat. But that’s the danger of creativity, the danger of an experience. You may want the same, the same, but maybe that’s not the healthiest thing.

The Neon Demon felt just as much about show business and Hollywood. Not just fashion, but the film industry.

Oh yeah, the mythology of Hollywood. It’s the sponge of everything we have around the world. Metropolitan cities lead back to Hollywood.

Do you live there now?

No, I live in Copenhagen. But I spend a lot of time there, shooting a lot of commercials. I love LA, absolutely love love love the city. But that’s because I’m like Alice in Alice in Wonderland. It’s so strange and beautiful. It’s a bizarre place to visit, especially when you come from Copenhagen, which is the exact opposite. You really are like a stranger in a strange land there.

So is the movie a reflection of things you’ve seen, or a fairytale you thought up? Or is it a cautionary tale?

I think that’s part of fairytales. They’re very cautionary. Its always about a beautiful young girl who has to go on some kind of journey. All you have to do is read the Grimm’s Fairytales and its all in text.

Were you working off that idea?

No, but I’ve read a lot of them, especially when I did Drive, which was very much like a fairytale in its DNA. This was the same thing.

And as a father to two young daughters, as you are, there’s a personal element to this story, no?

Of course. It was kind of like, this is the future they’re walking into. In order for us to deal with it, we have to accept it.

Its interesting that you say “accept it.” Because you can watch it and easily say it’s a rejection of that culture.

On the contrary. It’s as much an intoxication of it is as it is a criticism. But I don’t really critique something that I love, so it’s kind of a constant struggle, the yin and the yang.

So how do you show something that is outrageous the fashion industry and LA without criticizing it?

You don’t judge it, you just show it.

But doesn’t sometimes showing something inherently create a criticism?

No, because I’m not criticizing it for all the things it’s celebrated for, because I celebrate it myself.

So you’re just as guilty.

Oh, absolutely. Everyone is. It’s like the boyfriend in the movie, who sits there with all his good opinions about how beauty isn’t everything. And then the fashion designer says to him, “Well if she wasn’t beautiful, you wouldn’t have stopped to look at her.” We’re all hypocritical.

*You said in that documentary that you weren’t sure what Only God Forgives* was about, even as you were beginning production. Was that the same case here?

I knew it’d be about beauty, but I didn’t have it really clear in my mind until I hired Elle Fanning. It was because of her that the film became clear. When I met her, I asked her, “Do you think you’re beautiful?” And she said yes. And then I knew this film was a celebration of narcissism that it was always meant to be. I just didn’t know it yet.

**I guess you’re established enough that you can get a film going before really establishing the premise.

I have to deliver a script and everything. Everyone knows it changes.

Do you find compromises you have to make — are those positive in the end?

You made three Pusher movies. Would you want to make a second Drive movie?

No, there will never be a second Drive movie.

Because it ends too perfectly?

No, it ends too imperfectly. And that’s why it works.

Have people — studios, financiers — wanted you to make another one?

There’s been a lot of talk. But in the end studios didn’t want to do it, originally.

Does it make it easier to have a backer like Amazon now?

Amazon has a whole set of opportunities that are very new to me, because of how big they are, how much potential they have.

What is the future of film?

Bright. Beautiful. And different. Because there will always be cinemas. But the digital revolution is forever. That concept is so new to us.

Do you like that people can stream this at home?

Of course. Why not?

Some filmmakers don’t like that people can watch their movies on their iPhones.

I watch films on iPhones to understand the new canvas. Technology only allows you to adapt. It doesnt change the fact that this is a creative medium. Now you make movies for cinema and the iPhone. Thats a big scope.

So when you were making The Neon Demon, were you thinking that some people would watch it on their laptop, some on their iPhone? Did you plan for that?

I thought of it as people seeing it on YouTube, chopped up. Because every ten minutes, it reinvents itself. The same thing with Only God Forgives.

So they were segmented.

They were like installations as much as they are movies.

And you weren’t worried that people would chop it up on YouTube.

On the contrary, I would invite them. I think technology is a beautiful possibility to create and consume. The rules of the future is not about what you make, it’s about what you stand for.

So what do you stand for?

Singularity, unapologetic, no compromise. Three things that can never be taken away from you.