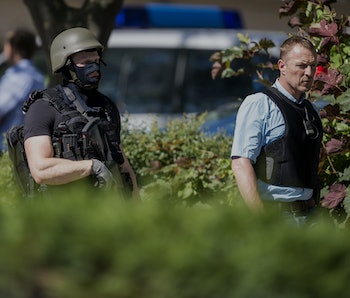 A masked gunman entered the complex and fired a few warning shots into the air with what’s been described by reports as a “long gun,” then took hostages. After a short stand-off with police, the assailant was killed by German SWAT members. No civilians were harmed. Police deny earlier reports of minor injuries due to the use of countermeasures like tear gas.

Just before 3 p.m. local time (9 a.m. Eastern) the theater was about to start its first showings of the day. Patrons filed in to watch movies like the Jungle Book and Central Intelligence. Then, according to German state television, a masked gunman entered the Kinopolis theater and shopping complex 40 miles south of Frankfurt.

According to the German tabloid Bild, the first news agency to report on the story, the assailant entered the theater with a gun in hand, a cartridge belt around his shoulder, and fired four times into the air. German police immediately assembled and flew in elite units by helicopter from Frankfurt which is about an hour-long drive north by car.

After a brief stand-off where the gunman barricaded himself inside the cinema complex with hostages, police entered the theater and shot and killed the assailant, according to BBC News.

Additional reports by Bild said, “This was confirmed by the Hessian Ministry of the Interior. All hostages were freed unharmed - 25, however, were affected by tear gas,” and that “in addition to the body of the offender, the LKA [German State Police] found a hand grenade and an explosive belt.” There is still no confirmation if the weapons are real.

In the same report, the German paper says that officials don’t believe this to be a terrorist attack, but a “confused individual perpetrator.” The man may have been suffering from some form of mental illness.

Here’s where the theater is located:

Some feared today’s incident could have been a repeat of the 2012 shooting that occurred in the United States at a movie theater in Aurora, CO. On that night, James Eagan Holmes bought a ticket to the midnight premiere showing of the newest Batman movie, The Dark Knight Rises at the Cinemark Complex in the center of town. Shortly after the movie started, he went to his car through the emergency exit and came back fully armed and armored. Other theatergoers mistook his outfit for Batman cosplay until Holmes fired off a couple of gas canisters into the audience. Holmes then proceeded to unload 72 rounds into the crowd, switching from a shotgun to a semi-automatic rifle, and finally, a handgun. Police apprehended Holmes without incident near his car parked outside the theater. When the chaos ended, 12 people were dead and another 70 were injured.

Holmes could have killed even more people. Authorities who went to his home to investigate his background, found it booby trapped with explosives. The bomb squad had to disarm the homemade devices before anyone could enter.

Holmes’ trial began in April 2015, and he pleaded not guilty by terms of insanity. After three months of court proceedings, the jury convicted him on all counts. He was sentenced to serve 12 consecutive life sentences — one for each murder — without the possibility of parole, and an additional 3,318 years for the attempted murder of all of those he injured.

As reported by The Guardian, Germany has a comparable gun to person ratio as the U.S., but the country has one of the lowest rates of gun homicides in Europe. After a high-profile school shooting that occurred in Stuttgart in 2009, the country enacted laws requiring that any citizen under the age of 25 looking to obtain a firearms license must first undergo a psychological evaluation by a trained and licensed counselor.