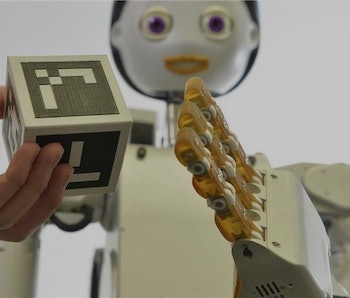 A robot with emotions made its world debut on Wednesday. “Floka” is a service bot for the home with facial features and social assessment software, able to communicate how it feels to humans. Ideally, “Floka” will be able to read the room and adapt its tasks around house guests.

“Floka” is part of an exhibition by the Cluster of Excellence Cognitive Interaction Technology (CITEC) on how the “home with a brain” may look. The team, which is part of Bielefeld University, is showing their ideas at this week’s Automatica Munich robot show.

“Floka” is being taught by researchers how to assess social situations when helping out around the house. Initial versions used a simple sensor head, but the researchers found that having a towering robot the size of a small adult trundling round the room was a bit too weird.

Adding facial expressions meant “Floka” could communicate to humans if it was angry, worried, happy, or interested. CITEC did not explain what an “interested” facial expression looks like, but it presumably involves leaning forward and raising the eyebrows in a totally-not-creepy way.

“The social robotic head has the most important features of a human face – eyes, eyebrows, and mouth and with its cartoonish face, it has a friendly appearance,” Privatdozent Dr. Sven Wachsmuth, head of the CITEC Central Lab Facilities, said in a statement. “With its facial expressions, the social robotic head can show attention and give feedback. We can also vary the appearance of the robotic head to make a feminine one look more masculine, or make an older head appear younger.”

The robot is joined by four other ideas that could help transform daily life. One is the Amiro, a tiny 3-inch tall robot on wheels with a camera attached. Amiro can roam around the house, hooking up remotely to a smartphone, to keep an eye on the place while the owners are on holiday.

Another is the Soundscape Refiner, used at the exhibition stand to create a more pleasant ambient sound. The refiner takes sounds from the environment, changes them into more pleasant sounds and overlaps the two to try and cancel them out, replacing the noise with a nicer tone.

The last two are Adamaas, a pair of glasses that provide helpful comments when a user is trying to complete a task, and the KogniChef. This is a smart kitchen that provides alerts when a cook is veering off course. CITEC compares it to a car’s “lane assist” system, where the KogniChef will load up recipes and and make sure every one turns out great.