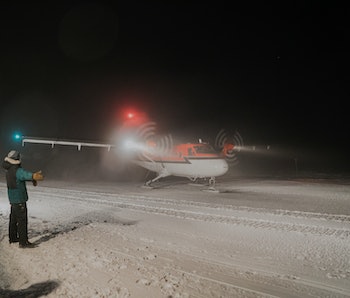 The mission was ordered more than a week ago in order to evacuate a staff member of the research station who required medical care beyond what could be provided on site. After some deliberation, a second unwell staff member also boarded the return flight.

While the sick employees of NSF contractor Lockheed Martin have yet to reach hospital care, they have successfully completed the first return flight. Antarctica is currently in the depths of winter, and the sun will not rise again at the South Pole until September 20. Temperatures at the pole were about -58 Fahrenheit during the rescue, and winter storms could have easily derailed the rescue plan.

The weather at Rothera is comparatively balmy. Thanks to its coastal location, the current temperature is 27 degrees. While the sun will not peak above the horizon for about another week, the station does experience a period of twilight at midday even at winter’s darkest point.