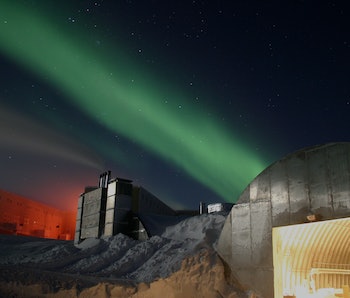 A daring rescue mission is currently underway to bring home a sick scientist from the most remote place on the planet. The place is the Amundsen-Scott South Pole Station, and the plan is risky. It would be significantly easier to evacuate the International Space Station.

Every year, about 50 scientists and technicians sign up for an impossibly brave mission: spending the winter at the planet’s South Pole. Consider this: at the Amundsen-Scott South Pole Station, each year consists of a single day and a single night. The sun set on March 22, and will not rise again until September 20. Now, as the vast majority of Earth’s residents await the coming summer solstice, residents of Antarctica are nearing the deepest depth of winter. The temperature right now is -76 Fahrenheit, although with the wind it feels like -114. Jet fuel turns to frozen jelly at much warmer temperatures than that — you cannot fly a plane there unless you can first find a way to heat up the fuel tank.

The people who decide to spend a winter at the research station are well aware that they are stuck there. In 60 years, only two previous winter rescues have been attempted. Before the first one, in 2001, there was no evacuation plan, because no one believed it could be done.

Officials with the National Science Foundation won’t say what exactly is going on to merit this spectacular mission, just that at least one employee of contractor Lockheed Martin needs medical attention badly enough to make the attempt, according to reporting by the Washington Post. The foundation, which runs the station, made the call on June 14 to send in the rescue team.

Bringing home a sick astronaut from the International Space Station, by contrast, would be a simple matter. A Soyuz Crew Return Vehicle is permanently parked at the station, ready to go at a moment’s notice in the event of an emergency. That escape hatch was nearly employed a year ago, when some space junk threatened to collide with the station in a real-life version of the plot from Gravity. The ISS astronauts waited out the danger in the Soyuz capsule, but fortunately the space junk continued on its way without incident. The return trip to Earth, had it been required, would have taken 3.5 hours.

Here’s what it takes to bring someone home from the South Pole in the dead of winter: Two Twin Otter planes, specially built for Arctic conditions, left Calgary, Canada on Tuesday. They each carry a pilot, co-pilot, engineer, and medic. The crews landed in Costa Rica earlier today. Their first stop on Antarctic ice will be at the Rothera Research Station on Adelaide Island, where conditions are still brutal but significantly more hospitable than at the very bottom of the world. They should arrive there, if all goes well, some time tomorrow.

The final leg of the journey — a ten-hour trip — will be made by just one of the two crews, allowing the second to be available for a rescue of the first if required. You only have 12 or 13 hours of fuel in your tank, Alberta bush pilot Sean Loutitt told the Washington Post. That means, you have about six hours to make a call and turn around if the weather looks bad ahead — after that, it’s South Pole or bust. Loutitt and co-pilot Mark Cary flew both of the successful South Pole winter rescue missions to date.

If the weather cooperates, the plane could reach the South Pole on Sunday. From there, it’s just a matter of getting the evacuee on board, refueling, potentially figuring out a way to unstick the landing gear from the runway, taking off, and hoping for calm winds.