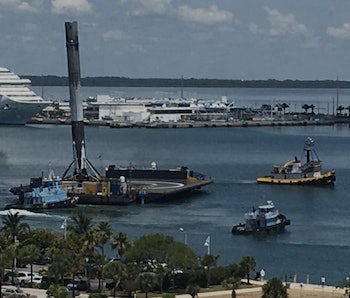 The Canaveral Port Authority chose to delay a vote on the proposal to charge SpaceX a $15,000 cargo tariff fee today.

SpaceX raised concerns about the fee earlier this week, and today, Port Canaveral’s CEO John Murray pulled the item from the meeting agenda. Murray said there is no reason to consider increasing the tariff fee because Port Canaveral and SpaceX have a good relationship, Florida Today reports. Murray also stated that officials from SpaceX and Port Canaveral will meet in private to talk things out, but did not say when the meeting would occur.

SpaceX has made something of a name for itself, thanks to eco-friendly, cost-efficient missions and the company’s practice of re-using rockets (among other materials) for missions into space. SpaceX’s cargo missions have helped furnish the International Space Station with needed supplies and equipment over the past year and next month’s mission will send more supplies for future manned expeditions. But an upcoming meeting might put a major block in this rapid road to space travel.

At the moment, SpaceX pays roughly $3.02 per ton of cargo on each of its missions. The proposed raises increase that fee by a huge percentage, with a base rate of $500 per ton. Add that all up, and SpaceX could be paying up to $15,000 per rocket, which, obviously, is something the company objects to.

“The proposed wharfage fee is 14 times higher than what any other business is being charged for using port facilities,” John Taylor, a SpaceX spokesman, wrote in an email obtained by The Verge. According to The Verge, the highest anyone pays for that kind of cargo is $35.50 per ton.

Those on the board at Port Canaveral see things differently. In fact Port Canaveral CFO Rodger Rees said that the proposed rise in fees are based directly on what other ports are doing. “Due to the heavy weight and the effect of this weight on the Ports [sic] berths, staff is recommending that its tariffs be expanded to include a wharfage charges category for aerospace aircraft items,” Rees wrote in a memo before the meeting.

So far, SpaceX has turned to landing its rockets on sea-based drone ships before transporting them back to a storage hangar at Kennedy Space Center. SpaceX’s partnership with Port Canaveral is key to these landings, so while the company intends to fight back against the measure, they’re not looking to burn any bridges either, and called Port Canaveral an “important partner” that they hope to continue working with.

More like this
Science
Feb. 2, 2023
Exclusive: NASA Explains How the Voyager Missions Could Live Until 2035
By Kiona Smith
Science
Feb. 4, 2023
An Upcoming Mission to the Dark Side of the Moon Could Radically Reshape Astronomy
By PAUL M. SUTTER and Universe Today
Innovation
Jan. 25, 2023
Starship orbital flight: SpaceX successfully loaded the rocket with over 10 million pounds of propellant
By Mike Brown and Molly Glick
LEARN SOMETHING NEW EVERY DAY.
Related Tags
Share: