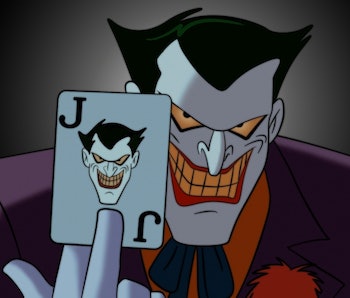 One of the most pleasant surprises from last week’s E3 was the reveal of Batman VR, one of the titles launching alongside Sony’s Playstation VR later this year. The game puts players in the shoes of the world’s greatest detective as he hunts down the person who killed his protege, Nightwing. A stronger focus on actual detection is the gameplay hook in Rocksteady’s newest Batman outing, but the casting is the title’s biggest draw.

In spite of the fact that the game is in the hands of a seasoned and trusted Batman game maker, it’s Mark Hamill’s inclusion as the Joker that has generated the most buzz around the title, with good reason. You can’t have a Batman anything without inviting the Clown Prince of Crime, and you can’t animate the Joker without adding Mark Hamill’s distinctive cackle. For nearly 25 years, the man most famous for playing a Jedi has embodied the role of the Joker so perfectly that his performance has become synonymous wit the character itself.

It’s All About the Laugh

In 1992, Bruce Timm and Eric Radomski created a noir cartoon set in a 1940s(ish) Gotham City. In spite of the fact that Batman: The Animated Series was aimed at children, it’s appeal was universal. The distinctive art style and dark themes, have in the years since, marked it as one of the best comic adaptations of all time. It was in this environment that Mark Hamill was brought in to read for the part of Batman’s greatest nemesis.

In crafting the Joker for the series, creators needed to find some way to preserve the Joker’s innate scariness without having him actually kill anyone. Fortunately, when Mark Hamill was brought in to read for the role, he knew exactly which well to plumb to find the best parts of the Joker. As Hamill put it, you had to play the laugh like a “musical instrument.”

Hamill’s primary inspirations when tackling the role were two violently contradicting personalities: Hannibal Lecter and Jerry Lewis. The absurd juxtaposition of these warring identities on screen makes every part of Hamill’s performance intensely engaging, but that fierce duality is no more present than in Hamill’s psychotic cackling.

In the 24 years since Hamill won the role of the Joker (he reportedly beat out Tim Curry for the part), he’s come to epitomize the character in the minds of fans. Even after Batman: The Animated Series ended its run, Hamill continued to play the role every time the Joker showed up in cartoon form, appearing in Superman’s animated series as well as several of DCs animated films.

Hamill’s consistently engaging voice performance have led several of his fans to claim that, unlike the goodie goodie from a galaxy far, far away, the Joker is actually Hamill’s best role.

Throughout his two-plus decades as Batman’s most famous nemesis, Hamill has always played second fiddle to Kevin Conroy’s always adept portrayal of Bruce Wayne (he’s solid, but Hamill gets all the best lines). In 2016, though, Joker will take center stage in the The Killing Joke, an adaptation of Alan Moore’s seminal graphic novel. Long considered the best Joker story in comic history by everyone but Alan Moore, the release of The Killing Joke marks the end of a years long campaign by both fans and Hamill himself to see the shocking story brought to the screen.

Joker In the Flesh

There’s no telling what’s in store for the story of Batman: Arkham VR, but Rocksteady has three well-liked Batman tales under their belt, so fans can rest relatively easily. If the game studio stays true to their previous efforts, the Arkham series, then gamers should be in for a pretty intense excursion in the Dark Knight’s boots. After all, both Hamill and Rocksteady have proven that they’re willing to take the Joker to a pretty dark place.

Over the course of his career as DC’s chief villain, Mark Hamill has been transformed into a mongoloid, killed off once or twice, and thwarted on more occasions than you can count. Hamill continues to find something new to bring to the character. In the process, he’s set the standard across all mediums when it comes to playing the Joker.