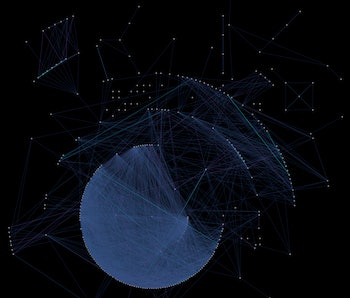 Facebook is a UX design, a bunch of algorithms, a lot of office space, tons of servers, and, depending on how you look at it, a force for good or evil. Economically, the company has become hard to reckon with: When Zuckerberg talks about the impressive productivity of his employees and his company, it’s easy to forget that not everyone is reaping the benefits of connection. A report commissioned by Facebook insists the company grew the global economy by $227 billion in 2014, but other research suggests that lost productivity from time spent on social media costs the United States economy $650 billion.

Over at Forbes, Tim Worstall has argued that time spent on Facebook isn’t time wasted. Instead, he says, it’s because we value that user experience more than a hypothetical promotion or pay raise. This is, of course, a load of insane. This logic applies the classic economic assumption that humans are self-interested automatons and applies it to what a social psychologist might describe as a honey trap. Facebook’s interface is designed to grab your attention and keep it, regardless of the consequences to your wellbeing.

The fact is, you only choose to spend time on Facebook in the most superficial way. The best explanation of how this works was authored by Tristan Harris, who used to be a design ethicist at Google, and now encourages awareness about the ways in which software takes advantage of psychological vulnerabilities to hijack your time. Here’s the synopsis: Every social media feed in existence is designed to work like a slot machine. Slot machines are insanely profitable because they are insanely addictive. They work on a principle of uncertain and variable rewards: You keep pulling the lever despite the fact that you know you are likely to lose because you are excited about the possibility of winning.

You’ve probably noticed that most of your Facebook news feed items are not relevant to your life. This is by design. Facebook knows enough about your preferences that it could easily, say, compile a short list of the most meaningful new posts and send it to you in a daily or weekly update email, as an alternative to the news feed. This would be incredibly respectful of your time, but not in Facebook’s business interests. By providing you with an infinitely scrolling feed made up of a mix of interesting and irrelevant information, Facebook maximizes the chances of keeping your eyeballs glued to the site.

Of course, you could just sign off, or delete your account, but Facebook won’t make this option easy for you. If you try, it will trigger your “fear of missing something important” and give you multiple chances to reconsider the decision, which you can easily reverse later. There are several ways you can modify your news feed content, but turning it off isn’t an option — this allows Facebook to hold up the appearance that your preferences matter, when in reality the company is controlling and limiting your choices for its own benefit. For example, you have to land on the news feed first before you can get to anywhere else on the site, so even if you came to Facebook with a specific goal in mind — say, to check the time and address of an event — you’re likely to get sucked into the scroll and forget what you had intended to do on the site.

Facebook wants to interrupt you and demand your immediate attention. Notifications used to be only for private messages and tagged photos — now Facebook will buzz your phone for just about any activity peripheral to your engagement on the site. There’s no single button to turn off all notifications — you have to click individually through groups you’re a member of and decide to limit or turn off notifications, which will again trigger your fear of missing something important and give you a chance to reconsider.

If Facebook is doing its job, then the result of this is that checking Facebook becomes a thing you do out of habit. Now, you don’t so much consciously log into the site, as respond to cues that prompt an automatic behavior. The cues could be notifications from the site on your screen or phone, or they could be more subtle — say, a feeling of loneliness, or wanting a distraction from the task at hand.

Imagine if, upon landing on Facebook’s main page, a notification popped up to ask, “Is Facebook really the way you want to be spending your time right now?” And then, if you click yes, “How many minutes would you like to spend on Facebook?” The site kicks you off after your self-imposed limit.

There are, of course, numerous productivity tools that will regulate and limit your social media usage. But most — if not all of them — require you to proactively seek them out and install them. By design, Facebook is able to maintain the fiction that if you can’t get any work done because you keeping checking your news feed, it’s because you are an unfocused, unmotivated procrastinator, — or the fiction that if you can’t stop stalking your ex, it’s because of a personal moral failing, and not because the site is built to encourage that behavior.

Some researchers, designers, and ethicists are working towards a future where consumers have social media platform options that respect users’ time and attention. Today, you’re pretty much on your own. You can switch off completely, which is hard to do and comes with social costs, or you can start to bring attention towards the ways that platform design is tricking you, and begin to regain control over your online experiences with small interventions — these might include using productivity apps, changing notification preferences, self-regulating usage, or anything else that works. Just don’t expect it to be easy — you’re fighting an uphill battle against a massive industry that has gotten very, very good at figuring out how to get your attention.

More like this
Mind and Body
Jan. 21, 2023
Procrastination study suggests a link to shoulder pain, bad sleep, and more
By Eva Skillgate, Alexander Rozental, Fred Johansson and The Conversation
Gaming
Jan. 15, 2023
Do video games make you smarter? One surprising genre leads the rest
By Richard E. Mayer and Knowable Magazine
Mind and Body
Jan. 15, 2023
Study reveals one brilliant brain hack that can unlock your creativity
By Lily Zhu and The Conversation
LEARN SOMETHING NEW EVERY DAY.
Related Tags
Share: