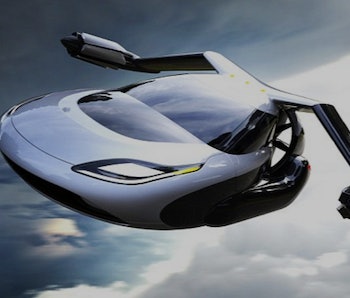 Google co-founder Larry Page has recently let it be known that he likes the idea of flying cars — both as a noun and as an activity. Turns out he’s not only the [money behind the flying car-making company Zee.Aero, which employs some 150 people and (the business mogul has invested more than $100 million), but also has a second flying-car enterprise dubbed Kitty Hawk. He’s splashing the pot on this thing.

And that’s all totally great. Page is a demonstrably intelligent man and it’s great to see someone who could easily spend the next half century sitting on board and in infinite pools remain so committed to innovation. Still, there are some question that, like the issue of gravity, need to be addressed: Are we going to need runways? What altitude would these cars fly at? What about birds? What about thunderstorms?

The first question is perhaps the only one with a truly solid answer. Page is interested in flying cars that take off and land vertically, a style of flight also of interest to fellow Silicon Valley titan Elon Musk, with whom Page is reportedly good friends. The vertical component makes a lot of sense; if the sky will be thick with private vehicles and airborne Uber-style services, relying on lanes of tarmac to land would pretty much defeat the whole point.

Still, this does mean that the flying cars of the future can’t be Back To The Future-style flying convertibles. According to Bloomberg, “Kitty Hawk is working on something that resembles a giant version of a quadcopter.” So, in a sense, what Page is working on the dronification of personal transport, not putting wings on a Datsun.

This makes a lot of sense. In 2012, a winged auto called the Terrafugia Transition reached 1,400 feet (for eight minutes). In China, a prototype passenger drone will reportedly fly at an altitude of 11,500 feet, so maybe we can use that as a model for the time being.

The questions about birds and the height of flying car throughways are intrinsically linked because bird strikes bring down small aircraft all the time and we’re not currently capable of convincing flocks of birds to go against their instincts.

Migrating Canadian geese may be the best example of a North American problem: The cruise between 2,000 and 5,000 feet. But most non-migrating birds like to hang out at 500 feet or lower. Too low and we’re just mowing through finches and too high and there’s a whole season when flying becomes terrifying. And it’s not as though the engines are going to scare off our feather friends. Birds fly into engines at weirdly high rates. It’s possible this will be less of an issue if we’re not in jets, but no one really knows. All we do know is that a flying V will scare the ever-living daylights out of commuters.

Also lightning. Page hasn’t spoken up about how he’d weather-proof his vehicles. This is a critical point because it may not be possible to wind proof something that small, at which point flying cars stop looking like an everyday transport solution and start looking a bit more like they belong in the Hammacher Schlemmer catalogue. Luxury goods, no matter how remarkable and paradigm shattering, don’t change the world.

The fact is that Larry Page has not answered these questions because he’s busy actually building flying-car companies. Good for him — for now. The public is going to need many more answers to many more peculiar questions (you going with FM radio or Sirius, Larry?) before reaching for its collective wallet. If his goal is to build something amazing, there’s no reason to suspect Page won’t succeed. If his goal is to get us airborne, well, we may need to have a public discussion about the place of ducks in our society.

More like this
Innovation
19 hours ago
Can cars run on water? The science of a TikTok conspiracy theory, explained
By Andrew Moseman
Innovation
6.27.2022 8:00 PM
Artificial photosynthesis can grow plants without light — and may solve a planetary dilemma
By Steph Lee
Innovation
6.25.2022 10:00 AM
9 veggies that are healthier cooked than raw
By Laura Brown and The Conversation
Share: