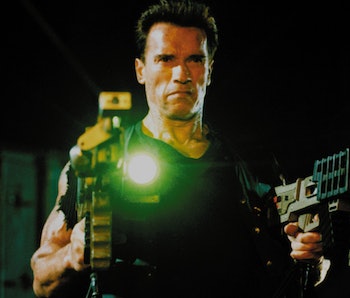 20 years ago today, Arnold Schwarzenegger’s Eraser hit theaters in the United States. The flick debuted toward the end of Schwarzenegger’s string of action classics, which began in the early eighties with Conan the Barbarian and wasnt properly ended until the travesty that was Batman and Robin. On that timeline, Eraser actually stands as Schwarzenegger’s last great action film before he went full Governator in 2003. In its initial release, the film grabbed $100 million at the box office and earned oddly positive reviews for such a straight forward, pun-tastic action movie.

In the two decades since the movie’s release, Eraser has rightfully been called the Most Arnold Schwarzenegger Movie Ever Made. All of the actor’s favorite things are represented: corrupt officials, quippy one-liners, world-changing stakes, and tons of sweet action. Also, James Caan and Vanessa Williams are there, doing good work to bolster the scaffolding.

At the center of the plot is one of the genre’s best McGuffins: the handheld electromagnetic pulse rifle, or railgun. The gun that helps propel the movie’s plot was, at the time, a technological figment that seemed almost real enough to be very scary.

The Cutting Edge of Weapons Tech in 1996

In Eraser, Vanessa Williams plays an employee for an arms manufacturer who she discovers is secretly selling weaponry to bad people. The labyrinthine conspiracy onto which she stumbles reaches into every branch of the government as a select cabal of shadowy white men try to get rich off of making the world a more dangerous place. While that particular setup may not seem far-fetched (like, at all), these particular dill holes are hoping to peddle a weapon that shoots rounds at about the speed of light. With an X-ray scope mounted on top, the weapon is really fearsome.

In the film, the claim is made that even in 1996, railguns actually existed, only in a much larger form. That much is true. Said Schwarzenegger at the time, “We paid a lot of attention to making the audience feel the danger of this weapon, that anyone can be outside of your house, looking right through the walls. It really leaves you nowhere to hide.”

‘Mounted on a Battleship’

If the railgun was just a theory in 1996, in 2016 it’s a few months from being a very scary reality. Recently, the United States Navy revealed their plans to have operational railguns mounted on destroyers by 2018. Field tests for these canons, which can shoot projectiles at six times the speed of sound over as much as 100 nautical miles, are set to begin later this year.

The devastating power of these weapons is still a few years away from operational. They’re also the least terrifying railgun advancement in the last twenty years. Private citizens have been toiling away in workshops for years and have turned out their own takes on Erasers fearsome weapons.

Whether you’d totally forgotten that Eraser exists or not, the gun has lived on in the minds of action fans. Of course, with rare exception, it is still basically impossible to actually build a railgun in your home unless you have loads of expendable cash and a double degree in engineering and mathematics. So, thankfully for society at large, while you might be able to buy the parts, you definitely cannot build one.

The at-home attempts do make for good fun, though, when they’re putting slugs through inanimate objects.

Last November, DIY hobbyist Ziggy Zee revealed his own mounted railgun. Ringing up at around $4,000 for all the component parts, Zee’s gun shoots bullets at 50 mph, which might not sound like a lot, but this railgun is impressive.

Zee’s gun is also 250 pounds and only capable of shooting one round at a time before it needs to be reset (which is a lengthy process). In other words, it’s neat to watch it shoot as derelict cars, but the gun has very little use beyond that.

On the portable front, redditor NSA_listbot has unveiled the first working prototype of an electromagnetic pulse rifle. It’s not shooting aluminum at the speed of light, but it’s nearly 600 miles an hour cruising speed is more than enough to get the job done.

The fact that some fella used a 3D printer to create one of these terrifying things in his garage doesn’t mean that its something anyone can put together (read: you can’t do it). The math alone would take a degree, and NSA_listbot wasn’t bashful about sharing his multiple failures as he worked to get the gun right. Even still, his railgun has lots of ground to cover before it’s able to work with consistency. The word “prototype” can’t be stressed enough, here.

Easily the scariest part of Erasers EM gun was the scope, an x-ray sight that could not only see through walls, it could see through skin (which may not have been totally necessary, but was still cool). It was one of those pieces of tech that would be completely horrifying in the hands of real world governments. Drones, for example, wouldn’t need high speed projectiles if they could see through a building’s roof.

Thankfully, the x-ray scope doesnt exist just yet, though they’re working on it. Nearly a decade ago, DARPA announced development of the radar scope, which, when placed against a wall, would be able to tell “warfighters” if anyone was breathing in the next room. It’s decidedly lower tech than Eraser’s magic scope, but that’s probably for the best.

The average person can rest easy, because it’ll still be years before you can Google railgun plans for your next DIY project, if it ever happens (fingers crossed that day never comes). The simple fact of the matter is that — in spite of the gun’s ever-present place in pop culture — it’s not really efficient or practical in any way.

As military tech, it’s coming along, but in the two decades since the release of Eraser the tech is still only in the testing phases. The US Navy wants a railgun mounted on the deck of every destroyer, but — on the level — they’ve been saying that for years. In a country with, plainly put, more than enough guns, railgun tech is still out of reach for 99.9 percent of do-it-yourselfers and they’re still a work in progress for most of the remaining .1 percent. So, while they play out kind of awesome on screen, the railgun itself is still firmly planted in the world of science fiction.