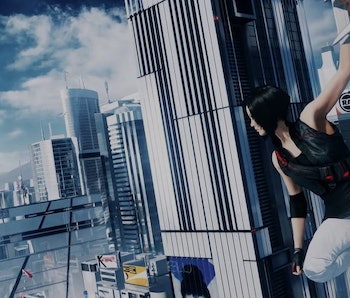 Some time around the release of 2K Games’ BioShock: Infinite, a discussion surfaced about the use of violence and video-game narratives. A term commonly used to describe this is “Ludonarrative Dissonance” – when the gameplay doesn’t match the story that’s being told. So, when a game that tries to tell a story or stars a certain character, where the extreme acts of violence typical in a video game would seem atypical, it becomes dissonant. The first Mirror’s Edge was one of those games. The sequel, Mirror’s Edge: Catalyst is not.

The first Mirror’s Edge and its sequel star is a courier named Faith Connors who gets in wrong with the authoritative, city bureaucracy. Her skills in free running and urban exploration are her key assets. The narrative for both her character, and what the free running couriers typically are in-universe don’t support the notion that Faith, or any of her compatriots, are violent murderers. Yet the first game, hampered by a need to please every type of gamer, forced players to take up arms and shoot at enemies. The developers attempted to make gun shooting unwieldy so as to indicate that Faith had no previous experience with firearms, but that only ended up making the forced firefights virtually unplayable.

The sequel does away with gun combat altogether. Not for Faith’s enemies mind you, but for Faith herself. Instead, the developers refined the free running gameplay, added to some of Faith’s melee combat abilities, and encourages Parkour-ing away from danger and gunfights whenever possible. In fact, the game encourages free-running and even gives Faith a sort of bulletproof shield when she maintains her run for a certain amount of time. At no point is Faith able to pick up a gun during an enemy encounter.

This is fantastic for a couple of different reasons. Most importantly, it feels in-line with the universe EA and DICE introduced players to with the first Mirror’s Edge back in 2008. In terms of overall narrative cohesion, and characterization, doing away with guns for Faith is the right call.

Secondly, it indicates that video games have moved past trying to appeal to the strictly “gamer” crowd. Sure, there have been games that took away weapons before, but this is a much bigger project, from a huge video game studio. It might as well be the equivalent of Marvel producing a film directed by David Lynch. If a company like EA believes its studios can develop a game that forgoes the typical first-person shooter crowd, it’s indicative of at least some change in the game industry.

Consider some of the other games typically associated with the Ludonarrative Dissonant label. BioShock and Uncharted are two of the most famous ones. The former kicked off a firestorm debate between critics who believed that BioShock’s narrative ambitions were hampered by Call of Duty style, “meathead” violence according to Polygon’s Chris Plante; and those who felt that the extreme levels of gore contributed to the story of revenge BioShock was telling. Alternatively, Uncharted left critics (myself included) bugged out by the fact that Nathan Drake, who, by all metrics, is a charming, affable, grab-a-beer-with kind of guy- is a mass murderer. No, seriously, his body count across four games could put most super-villains to shame.

Where does this leave Mirror’s Edge: Catalyst? Aside from signalling a willingness to estrange “core” gamers – the so-called Call of Duty “meatheads – it also feels limiting in some ways. No, not limiting in that I can’t fire a gun, but limiting in the sense that the game didn’t quite realize how to reconcile this new, gun-free reality. Combat is still forced upon Faith, only this time she utilizes a martial arts that is oddly, heavy, for someone who runs so gracefully.

Doing away with combat altogether wouldn’t necessarily make sense either as she is being hunted down by government soldiers. What’s left is a strange blockade to the pacifism Mirror’s Edge: Catalyst tries to cultivate. Catalyst creates an environment dedicated to freedom. One that allows for a nearly continuous run of chaining together jumps, slides, wall crawls, and rolls. Here, a player could survive the entire time without lifting a hand against an enemy soldier. The game’s actual story forces that hand, and in doing so essentially declares that progress is earned through violence, even without guns. It’s a weird, mixed-signal that ultimately makes the decision of forgoing gun combat a little hollow.

There are gamers who want pacifist games. That’s why there are such things called “Pacificst Runs” where gamers play action titles like Fallout or Metal Gear without taking a single life. Now whether or not it’s because of the extra challenge these handicaps impose on a player, or a genuine desire to not embody a virtual murderer avatar is up to individual players. I myself would never play a pacifist run of a game unless the story called for it. But Mirror’s Edge: Catalyst is different because the story does seem to kind of call for it. Even the ending finishes without necessarily killing the final boss.

Between the two games mentioned above, I disagree with the idea BioShock is needlessly violent, and agree that Nathan Drake is too violent. Mirror’s Edge: Catalyst tries to have a cake and eat it too. It would have been a much braver move to remove combat altogether, but instead EA substituted bullets for brute strength. It’s close- closer than any other Triple-A video game title has gone to creating a pacifist experience. In the end though, it dials back video game norms just enough to seem different, without leading to much meaningful change.

More like this
Gaming
22 hours ago
How to Get the Scholarly Lisa Skin For Free in Genshin Impact
By Jess Reyes
Gaming
39 minutes ago
Last of Us 3 Leaks Claim the Sequel Will Be a PS5 / PS6 Crossover Game
By Hayes Madsen
Gaming
5 hours ago
You Need to Play 2022’s Most Underrated Marvel Game ASAP
By Joseph Yaden
LEARN SOMETHING NEW EVERY DAY.
Related Tags
Share: