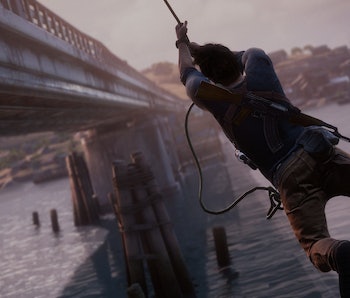 Over the course of three games, Naughty Dog’s Uncharted series became the marquis title on Sony’s Playstation 3, and Uncharted 4 just made its Playstation 4 debut. Despite the series’ coronation as the definitive title of Playstation’s latest generation of consoles, it’s still surprising to see it plagued by the same criticisms the series first encountered with Drake’s Fortune. Namely, that its emulation of big blockbuster adventure films and triple-A budget somehow renders the series a shallow, empty spectacle. That claim is baseless.

Uncharted 4 effectively ends the story of Nathan Drake, and like the three games before it, tackles a familiar adventure story trope: the “one last score” mission. By introducing Nathan’s brother Sam, who comes to him seeking his help despite the fact that Nathan is retired from the treasure hunting game, a bunch of red flags surface. Obviously, the job will go South, and obviously, the whole team might not make it back in one-piece. But Uncharted wasn’t made to subvert the adventure, it was meant to embrace it.

Uncharted arrived in a world that dubbed “Dude Raider” because of the limited video game canon featuring characters that traveled to dusty old temples to find treasure. From the beginning, Naughty Dog imagined a game in which it could lovingly render the ancient world in gorgeous detail, and have players, for the first time, explore parts unknown. It wasn’t Hyrule, but it might as well have been. The jungles of the Amazon, the mountains of Tibet, and the Rub’ al Khali Desert are just a few of the locations Naughty Dog presented to players across Drake’s sprawling adventures. This was the fantasy landscape often imagined in video games – only it existed, here, in our own world.

Without a compelling cast of characters to develop Uncharted’s thematic elements, however, have the potential to ring hollow. Nathan Drake, along with his partner Victor Sullivan and reporter Elena Fisher, are considered archetypal characters of the Hollywood variety. But I have yet to see any Hollywood cast as likable as the one in Uncharted. Who else is allowed to headline an adventure-action film with equal parts goofiness and seriousness as Nathan Drake (voiced by Nolan North) is in the Uncharted games? The tropes Naughty Dog plays around with work as well as they do because they are reenacted by characters who, over the course of four games, developed into original, fleshed-out actors in their own right.

Granted, there are genuine critiques to be applied to the Uncharted series. The massive body count piled up by the end of each game – without ever being acknowledged – is certainly the biggest skeleton in the game’s closet. Then again, that’s the case with most PG-13 action heroes whose murderous rampages tend to go unnoticed. This doesn’t excuse the Uncharted games for failing to remedy the faults of its genre, but it wasn’t necessary for them to set out and fix all that was broken with adventure stories in the first place.

Uncharted was never supposed to be a dark subversion to genre stories like the studio’s grim masterpiece The Last of Us. Uncharted was meant to be a bold statement about loving the adventure of life, and the game made clear this sentiment by sweeping the player along for a ride across the globe, with characters who encounter setbacks, but never defeats.

Sic Parvis Magna, or loosely translated as “Greatness from small beginnings” has acted as the unofficial mission statement of the Uncharted games from the very beginning. While it’s hard to argue that Uncharted began small in any ways, it certainly grew larger and greater with each successive entry into the series. That Uncharted managed to in four games continue to craft lovingly told, swashbuckling adventures without falling into despair, shows that the joy of adventure was always first and foremost for the Uncharted games. It’s a grand sentiment that could only have been presented in a grand way.

I won’t argue cynically produced spectacle doesn’t exist. You only need to look at a Michael Bay Transformers movies to see how a filmmaker can manipulate sound and visuals to overstimulate its audience into submission. The argument is that certain game developers, typically the ones with large staff, large budgets, and a corporate mandate to maximize profits, have co-opted the profit-driven machinations of Hollywood to pursue top dollar by similar means. So it came to mean that Triple-A games, with their spectacle, are devoid of substance, utilizing the same sensory blitzkrieg to confuse the player’s senses into oblivion. Nevermind the craftsmanship that goes into the production of any video game.

To approach all big-budget entertainment with this view is also cynical, reciprocating an assumption with a premature lack of goodwill. Uncharted through its sheer size and visual beauty aimed to overpower this bias, and for the most part succeeded. We should have been so lucky to be able tag along with a cast as fun, and multi-faceted as the core Uncharted cast as they traversed across exotic landscapes. That Uncharted did this without irony, but a joie de vivre is frankly refreshing for any series looking to make a name for itself in the pop-culture canon.

Uncharted didn’t look to upset the established order and joylessly tear down its idols, Uncharted was built to join them. Likewise, the games should not be torn down for its large setpieces, and Hollywood stylings. The Uncharted games have always unabashedly worn its heart on its sleeve. Uncharted 4: A Thief’s End gives a satisfying conclusion to an epic adventure, and reaffirms the love of adventure the games have always pursued to perfection.

More like this
Gaming
6 hours ago
8 can't-miss hits in the Nintendo Switch blockbuster sale
By Joseph Yaden
Gaming
9 hours ago
20 years ago, one unforgettable heist game changed PlayStation forever
By Willa Rowe
Gaming
7 hours ago
Square Enix is doing one thing every game company needs to copy
By Hayes Madsen
Related Tags
Share: