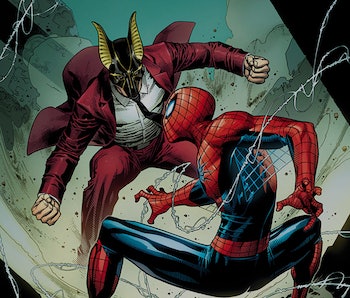 Since Dan Slott has been writing The Amazing Spider-Man at Marvel, the scribe has been teasing a major development for the neighborhood webhead on the horizon, along with big hints from Marvel with the vague words, “Dead No More.” Fans can now wonder no more: The Clone Conspiracy, featuring the return of Spider-Man villain The Jackal, will kick off in The Amazing Spider-Man in a five-part mini-series starting this October.

“The Jackal has always seemed to be obsessed with cloning Spider Man and Gwen. He’s had a very narrow focus,” Slott told EW. “That’s led to very interesting stories in the past, but you have to stop and think, if you’re The Jackal and you take science to the next level, what’s more important to you than just cloning Gwens and Peters? What does this character want, and what’s he going to do with this awesome science?”

Spider-Man readers either get hyped or cringe at the word “clone.” The infamous 1994 storyline The Clone Saga from Terry Kavanagh (and a handful of others) in which Peter Parker learns he’s not real, but a clone, had a lasting effect, good and bad, on comic book fans to this day. The Clone Conspiracy subtly references this era, using the sharp, rigged font Spider-Man comics (and Fox Kids TV show) used in the early ‘90s. But Slott and Marvel editor Nick Lowe still plan to make their book accessible to regular, new and lapsed readers of comics.

“As much as there’s all these touchstones for people who have been reading the book for a long time, there’ll also be great jumping-on points for people who have been Spider-Man fans their whole lives who want to come back and see what we’re doing,” said Slott. “When you jump in to the prelude issues, or the series proper, it will take you by the hand and lead you into this fresh hell.”

More like this
Entertainment
7.4.2022 11:30 AM
10 years ago, the most misguided Spider-Man movie almost killed the franchise (again)
By Felipe Rodriguez Torres
Entertainment
6.30.2022 3:14 PM
Who is Red Dagger? Meet Ms. Marvel's first real sidekick (and first kiss)
By Eric Francisco
Entertainment
9 hours ago
Like Guns N Roses, Thor: Love and Thunder asks: Where do we go now?
By Eric Francisco
Related Tags
Share: