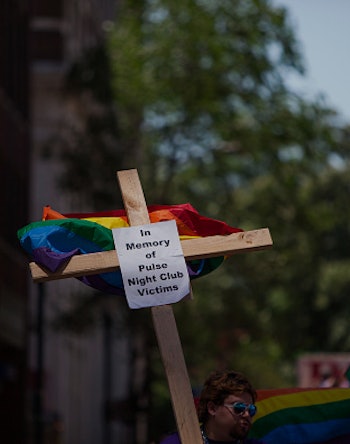 Researchers at the University of Miami and Harvard say the way social media platforms are combating pro-ISIS accounts isn’t working. Instead, they’ve developed a new model of how supporters of the terror group organize online — one that they say could be used to predict future attacks.

In a paper published Thursday in Science, a multi-disciplinary research team laid out a new, ecosystem-based model to apply to the ISIS supporters’ dynamics online. The group found that extremists grouped together in fewer than 200 “aggregates” on the European Facebook-equivalent Vkontakte, and that those aggregates were ever-evolving entities that resembled schools of fish. Small aggregates grow larger over time, until suspension by the social media platform scatters them briefly (much like a predator intruding on a school of fish), before they re-coalesce and begin to build up again.

The report’s lead author, University of Miami physics professor Neil Johnson, says that tracking aggregates, rather than the tens of thousands of individuals who express interest in ISIS, would be a more effective strategy. “You can imagine any agency that’s trying to take an individual basis approach is absolutely swamped by the numbers,” Johnson said in an interview with Inverse. (Just on Twitter, for example, a 2015 Brookings report estimated there are more than 46,000 accounts operated by ISIS sympathizers.) “But you should be putting equal attention on these aggregates. There’s only a few hundred of them. They change over time, they adapt, they evolve: they are entities that you can track.”

And the aggregates don’t just provide streamlined insights into ISIS supporters —they could also help researchers predict future attacks. Prior to a major attack or wave of attacks, researchers would expect to see an escalation in the rate of new aggregates being formed.

Johnson discovered the concept of social media aggregates while analyzing social media dynamics leading up to civil unrest, such as the explosion of street protests across Brazil in 2013. In Brazil, Johnson found that protesters had organized into aggregates on Facebook community pages, which helped to drive action. But when he looked to Facebook for similar aggregates in the world of ISIS, he came up empty-handed: Facebook has been lauded by experts for policing its platform so well that pro-ISIS groups and pages tend not to last long.

Vkontakte, or VK — a Russia-based social media site that is the largest in Europe — was another story. The Russian version of Facebook has already become a haven for other extremists, like American neo-Nazis, who’ve been thwarted on Facebook.

By viewing ISIS supporters through the lens of aggregates, surveillance systems can gain a new perspective on events that are called “lone wolf” attacks, like the Orlando mass shooting this past weekend. “If you’re developing a theory of how water freezes, you’d never get there if you looked at an individual molecule of water,” Johnson said. “Freezing, like any transition in a system, comes from a build-up of coordination between interacting objects.”

Even though Omar Mateen carried out the nightclub massacre alone, Johnson says it’s unlikely he was a true lone wolf online. According to law enforcement officials, Mateen had viewed ISIS videos online, including beheadings. Thinking of the killer as an individual, rather than a part of a system, reduces the insight his attack could give authorities about ISIS supporters more broadly.

Much of the current research on the Islamic State’s social media reach focuses on Twitter, where ISIS disseminates propaganda and recruits new fighters. Lawmakers, too, have focused on the site: this January, Obama administration officials traveled to Silicon Valley to meet with tech executives about combatting the influence of ISIS online. A month later, Twitter announced it had shut down 125,000 accounts associated with the terrorist group.

In the 2015 Brookings report, researchers concluded that Twitter’s efforts to suspend ISIS-related accounts had “concrete effects” limiting the reach and scope of ISIS activities—a conclusion backed up by a paper published by George Washington University’s Program on Extremism. In March, the nonprofit Simon Wiesenthal Center upgraded its rating of Twitter’s actions to combat terrorism from a C to a B, praising the platform for escalating its focus on suspending ISIS-supporting accounts.

But Johnson thinks that lawmakers need to look beyond Twitter to get at the heart of ISIS’s siren call across social media. The study of Twitter is largely a log of who follows who, rather than deeper connections being built between contacts. Even Direct Messages between Twitter users are limited to 140 characters per message. “I can follow Britney Spears, but I don’t think Britney Spears cares,” the physicist said. “It’s kind of meaningless. But these aggregates are not meaningless.” Instead, Johnson and his co-authors suggest, these densely connected groups of ISIS supporters might one of the most meaningful ways to understand the organization. Says Johnson: “Someone should be looking at this, and it shouldn’t just be a bunch of people down here in Miami.”