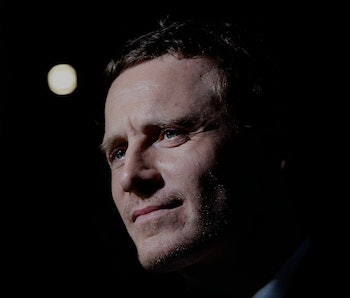 A new photo just posted on the official Alien social media account gives us a new look at the supposedly perfect robot.

In fact, contrary to rumors that actress Noomi Rapace would return, Fassbender is reportedly the only person (or in this case, synthetic being) reprising his role from Scott’s Alien prequel.

While it isn’t exactly the most groundbreaking or surprising photo, there are still a few interesting clues about what Scott is up to in Alien: Covenant.

The film’s subtitle refers to a ship that happens to discover Fassbender’s character living alone on an entire desolate planet he and Rapace’s character sought to find at the end of Prometheus. It seems as though they were looking for the origins of life that led to the creation of the xenomorphs, and unfortunately they didn’t find any. But that doesn’t mean there won’t be some alien antics to be had.

The photo shows the out-of-focus Fassbender on the ship sporting some closely trimmed brunette locks as opposed to the Peter O’Toole blonde he was rocking in Prometheus.

On top of that he’s sitting in front of what’s obviously a space helmet for the crew – to explore the desolate planet where they found Fassbender. Scott’s sci-fi designs have always been groundbreaking, but this simple yellow helmet is a far cry from the massive behemoth spacesuits from his 1979 original:

We’ll have to wait to see how Fassbender and new lead character Katherine Waterston, whose character Daniels is rumored to possibly be related to Sigourney Weaver’s iconic Ripley character, fit into all the xenomorphic antics.