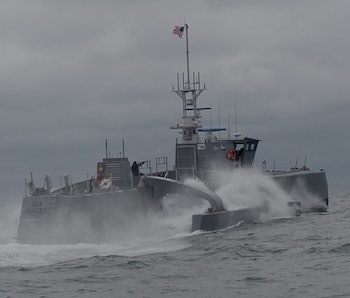 The U.S. military is all about drones. Aside from their controversial use to precisely (or not so precisely) bomb America’s enemies overseas with relative impunity, the government uses drones to chase storms and replace satellites, but DARPA’s new autonomous vehicle is exploring the seas rather than the skies.

The Sea Hunter is a DARPA concept vehicle designed to combat the threat of electric-diesel submarines, which are quieter than larger, nuclear-powered machines. It’s already started speed tests in the harbor, but on June 7, the Navy announced that the Sea Hunter had left on its maiden voyage out on the open ocean.

The ship is designed to function almost completely autonomously — while human crew members will control certain systems on the ship remotely, the Sea Hunter is designed to be able to navigate and track enemy submarines autonomously. In early voyages, of course, the Navy has crewmen aboard the ship to check that everything’s going well, but eventually the Sea Hunter should be able to zoom around sub-hunting without risking any sailor’s lives. It’s achieved up to 27 knots (about 31 miles per hour) in speed tests, so the thing is fast, and certainly capable of keeping up with submarines, most of which struggle to break 30 knots (34 mph) on a good day.

DARPA tweeted out a picture of the boat crashing through ocean waves earlier today.

And you can check out some of the speed tests here: