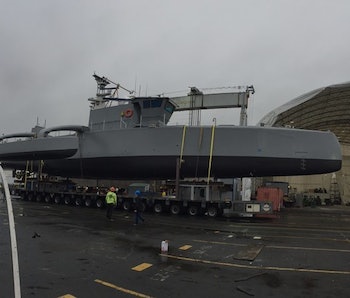 Taking one step closer to the day when all our fighting is done by robots, DARPA’s Anti-Submarine Warfare (ASW) Continuous Trail Unmanned Vessel (ACTUV, if you’re looking for its clunky acronym) is in the water and will launch for 18 months of long-range testing after in April.

Call it Sea Hunter for short. The 132-foot vessel — not much bigger than a large fishing boat — is designed to track submarine threats for up to months at a time without a human crew. As the technology is refined, autonomous vessels like the Sea Hunter will be able to chase down diesel-quiet submarines for thousands and thousands of miles.

Released today was this image of the ghost sub, as DARPA gave everybody a sneak peek on its Twitter account:

Enemy subs will find themselves hunted by an aquatic Terminator that doesn’t feel fatigue or remorse or fear and absolutely will not stop. So that’s pretty badass.

This sub — which could be on full patrol by 2017 if testing goes well — is just the latest tech to come from the armed force’s recent investment in autonomous fighters from self-piloting drones to tanks.

This concept video from DARPA gives you a sense of how the Sea Hunter will relentlessly pursue its prey:

More like this
Innovation
5.13.2022 11:00 AM
These robots have one special skill that could make human chefs obsolete
By Sascha Brodsky
Innovation
5.12.2022 6:00 PM
Star Wars: A robotics expert reveals the The Mandalorian's biggest flaw
By Sarah Wells
Entertainment
5.10.2022 11:30 AM
You need to watch the best war thriller on Netflix before it leaves this week
By David Grossman
Related Tags
Share: