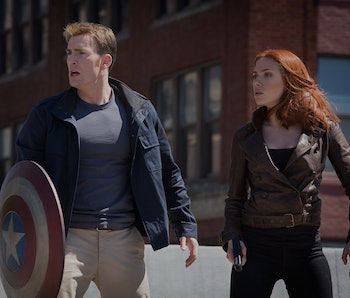 Heads up: spoilers for Captain America: Civil War ahead. Marvel’s latest installment to its cinematic universe pitted “Team Cap” against “Team Iron Man” in a live-action retelling of one of Marvel’s most beloved stories. In the film, sides were chosen, and Captain America faced off against half of his former Avengers team-mates on behalf of his beliefs (and his wayward pal, Bucky). But while most of the heartbreak occurred between Cap and Iron Man (with Bucky, here, also) the pain behind Cap’s other relationships were only lightly touched upon.

This kind of thing is expected in such a huge ensemble movie, with only limited time and specific focuses that work well enough to drive the story forward. But now, in a new animated storyboard released by artist Darrin Denlinger, a short fight between Captain America and Black Widow lightly throws back and adds fuel to the fire within the personal anguish of their broken friendship. Okay, okay, it’s not that dramatic (especially within the context of the film’s ending), but it is pretty cool.

Christopher Markus and Stephen McFeely, the writers behind Captain America: Civil War, have said that this particular fight scene was cut for time. This particular version also features Ant-Man using one of his creepy-crawly sidekicks to dash away in this scene — something that was absent from the final cut of the movie.

As a movie progesses from first draft to final cut, tonal adjustments are made to fit new endings and entire characters — such as Jena Malone’s role in Batman V. Superman: Dawn of Justice, which was not only cut from the theatrical release, but will also be missing from the DVD & Blu-Ray. Denlinger is posting other storyboards that never made it to the film on his YouTube channel, and checking them out might be a great way for fans to understand how much a film, especially one of this scale, can change and twist at every stage of production.