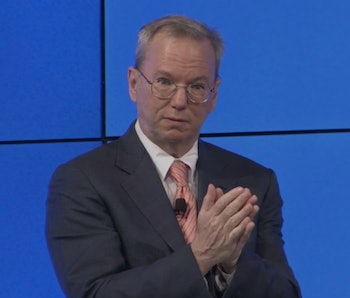 Eric Schmidt, the executive chairman of Google’s parent company Alphabet, is passionate about getting self-driving cars on the road as soon as possible.

“It’s time to make it legal, to literally be testing it, find the models that work, and offer it,” Schmidt said at Alphabet’s stockholder meeting today. The main problem? Schmidt says it’s “very hard to know” when autonomous cars will hit the streets.

“The consensus I think within the company is that it’s some years, not decades, but it is very much dependent on regulation,” Schmidt said. “And it also depends on where you are.”

Google has been working on a self-driving car since 2009 and currently has 58 vehicles on the road with autonomous capabilities. It has gathered data on more than 1.6 million miles of autonomous driving since the project started. But a patchwork of differing local regulations is keeping Google (and the many other companies working on autonomous vehicles) off of many of the roads in the country.

That’s a problem for Schmidt, because 32,800 people are expected to die this year in vehicle accidents on public highways.

“That is a horrific number,” Schmidt said at the shareholder meeting. “And that’s considered the best number ever on a miles-driven basis. How could you accept that? Why is this not a national crisis?”

Schmidt argues that finding a way to use autonomous technology to save lives should be a national priority with the same amount of attention the country put into going to the Moon and building the Interstate Highway System.

Google isn’t alone on this one. Nearly every major car company is working on self-driving cars in some fashion or another, and Elon Musk even says that half of all cars produced in seven or eight years will be fully autonomous. A power team including Google, Ford, Volvo, Uber, and Lyft got together to form a lobbying group called the Self-Driving Coalition for Safer Streets.

“These are ideas that are ready,” Schmidt said. “It’s time for this to take off.”

You can watch the whole speech below (Schmidt’s self-driving car comments come around 1:20:00)