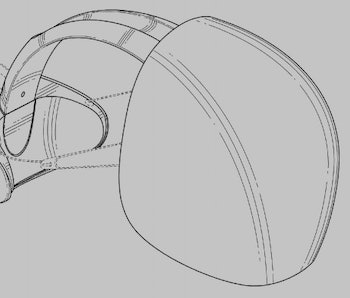 Magic Leap has officially filed design patents for its new Augmented Reality devices, and if the patents are granted, the futuristic headset could become a reality. The mysterious start-up just had an incredible round of funding, raising $4.5 billion dollars, with Google as one of the company’s top investors. So far, what the company has revealed has been out of this world, and the headset design is no exception.

The new design was invented by Magic Leap’s Shigeru G. Natsume, and unlike virtual reality headsets like the Oculus Rift, these AR headsets are built as a full-on face cover, with slits for outer vision. The technology uses those slits to projected augmented images to the user, but the reason why, or how the technology works, is a little more hazy. The company’s goals have ranged pretty widely, from mind control to predicting the future, but the actual path to it all hasn’t been very well defined.

The product does resemble the sleek curves of the Oculus Rift, and the heavy-duty hardware inside is also fairly familiar. The South Floridian augmented-reality company has otherwise remained hush-hush about what’s going on with the device, giving small hints in vague and interesting ways. Previews have included demonstrations of how the device will project images directly into your retina, going the extra mile to force your brain to process the images the way it does with things you see in real life, and some of the leading job openings this past spring were a little more than bizarre.

It is perhaps for this reason that AR enthusiasts should remain curious about Magic Leap, as opposed to brushing away the strange and secretive path toward the company’s first AR device. With a design similar to other popular devices, much like as the Rift and the HTC Vive, Magic Leap’s new AR device could step up the game when it comes to immersive, otherworldly escapes from reality.

More like this
Gaming
8.3.2022 6:00 PM
We Met In Virtual Reality offers a hopeful but flawed vision of the metaverse
By Willa Rowe
Innovation
15 hours ago
“Quantum materials” could give the human brain a run for its money, scientists say
By Nathaniel Scharping
Innovation
8.9.2022 11:00 AM
This self-healing material could fix your dinged-up car in 30 minutes
By Molly Glick
Share: