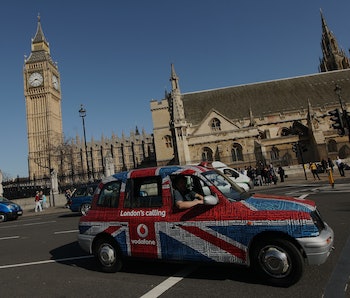 A British insurance company has unveiled one of the first self-driving car policies, providing a glimpse into how the industry might treat these high-tech hatchbacks in the future. Unfortunately, Adrian Flux’s policy, announced today, won’t allow your car to drive you home drunk from the pub.

The way the UK’s first driverless car insurance policy is structured means that the driver needs to always be able to take control. That means no napping behind the wheel, or getting your car to take you home after a night on the town, or indeed any of the things many were perhaps hoping to use their self-driving car for.

The introduction of the policy follows a bill introduced in May’s Queen’s Speech, when the U.K. government sets out its forthcoming legislative program. The “Modern Transport Bill,” according to the Financial Times, will extend compulsory cover to situations where the driverless car is at fault.

The big conundrum, however, is who will be liable in the event something does go wrong. Although the car drives itself, it will be hard to justify the manufacturer footing the bill in every case. “I can’t see a scenario where the entire vehicle manufacturing industry picks up the entire liability for every accident in the future,” James Dalton, director of general insurance policy at the Association of British Insurers, told the FT.

In Adrian Flux’s policy, it depends on the situation. If it can be proven that the driverless car failed in some way, for example it should have been able to detect a collision but failed to do so, then “the driver may not bear any responsibility.”

The firm says that the policy is part of an area of law still rapidly changing, so anything seen today may not necessarily reflect how these cars are treated in the future. “Whether it’s man or machine at the wheel — or a combination — the question of liability may never be fixed for all time,” the company writes. “Like the technology, it will evolve.”

It may take years for the dust to settle around self-driving car insurance, but Adrian Flux’s policy has provided an interesting insight into how the industry may look in the future. It’s a very alert-looking future, one that is always able to take control of the wheel, but an exciting one, nonetheless.